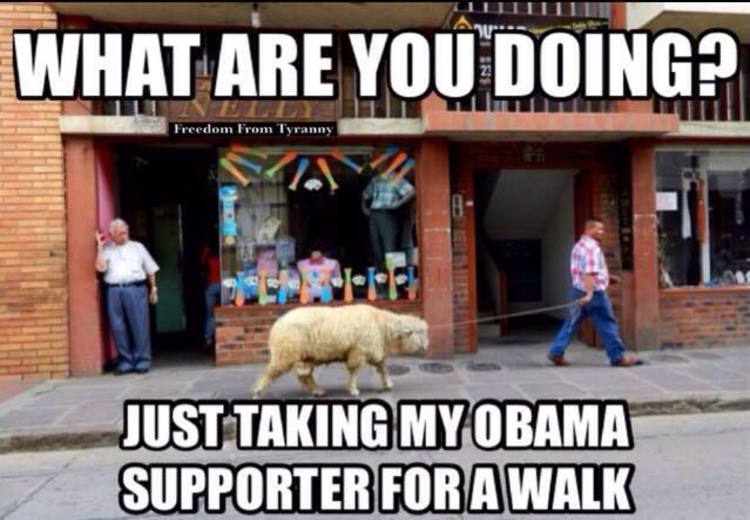 When The Daily Beast’s Olivia Nuzzi targetted 2016 Republican presidential frontrunner Donald Trump’s donors and supporters, Breitbart decided to point out some of the left’s own nutty supporters:

So, let’s do the same with Barack Obama.

Bill Ayers. In 2013, the former Weathermen Underground domestic terrorist admitted that Obama held a fundraiser in Ayers’ living room. Ayers was responsible for a major bombing campaign from 1970 to 1975, and has said that he would do the same today if given the opportunity. But when Sarah Palin accused Obama of “palling around with terrorists,” she was widely excoriated.

Louis Farrakhan. In 2008, the wildly anti-Semitic and racist Nation of Islam leader said of Obama, “The Messiah is absolutely speaking.” Speaking to a crowd, he stated, “You are the instruments that God is going to use to bring about universal change, and that is why Barack has captured the youth….Barack Obama to me, is a herald of the Messiah. Barack Obama is like the trumpet that alerts you something new, something better is on the way.”

Jeremiah Wright. The infamous “God damn America” pastor was the inspiration for Obama’s book Audacity of Hope. But when Obama pretended he heard nothing controversial after sitting in Wright’s pews for 20 years, the media played right along.

Felons. Obama got a sweetheart deal on a parcel of land from real estate scam artist Tony Rezko, and Rezko raised money for Obama when he ran for Senate. In fact, Rezko and his friends contributed over $120,000 while Rezko was being targeted by the FBI. Obama also raised money from bank=fraud convict Courtney Dupree; assault convict Willie Shepherd; and $200,000 he had to return from the American relatives of a Mexican businessman on the run from the law.

Palestinian Donors in The Gaza Strip. Obama received almost $30,000 in campaign donations from the Hamas-run Gaza Strip in 2008. The brothers who gave the money, Monir and Hosam Edwan, said that they supported Obama because he would force Israel to surrender to Palestinian terrorism.

Foreign Donors, Including China. According to the Government Accountability Institute, the Obama re-election campaign didn’t stop the influx of foreign money into election coffers. According to the report, from Peter Schweizer, the Obama campaign explicitly refrained from utilizing basic donation security measures that would have precluded such giving.

That’s just a few of the major donors. That rogues gallery is just the tip of the iceberg. These folks make Trump’s supporters look like members of the Salvation Army. And that’s just the people who gave significant money. How many Obama supporters believe that Republicans all hate Obama because they’re racists, that Jews control world economics, or that vaccines cause autism?

And then there are the Clintons.

Clinton Foundation Donors. As has been widely reported, Hillary’s foundation took cash from virtually every corrupt regime on the globe, including Algeria, Kuwait, Qatar, and Oman. Bill was invited by multiple human rights violating regimes to speak for reams of cash. As Schweizer has documented, Hillary and Bill used the Foundation as a cash cow, raking in dough in violation of ethics agreements with the Obama administration.

Felons. Back during the first Clinton administration, Clinton infamously pardoned Marc Rich in the hours before he left office. It was no coincidence that Marc’s wife, Denise, had given $1 million to the Democratic Party and $100,000 to Hillary’s Senate campaign. The Clintons have also used as major fundraisers at least two felons.

China. In the first Clinton go-around, the Clinton administration worked with agents of China to raise cash for Clinton’s re-election. At approximately the same time, the Clinton administration released millions of pages of data on America’s nuclear weapons program. No wonder former Chinese intelligence official General Ji Shengde told illegal fundraiser Johnny Chung, “We like your president. We want to see him re-elected.”

Again, that’s just the tip of the iceberg. It doesn’t count Hillary’s support from Hollywood depravities like Lena Dunham (admitted to sexually abusing her sister, falsely accused a man of rape) or Black Lives Matter radicals or the Communist Party.