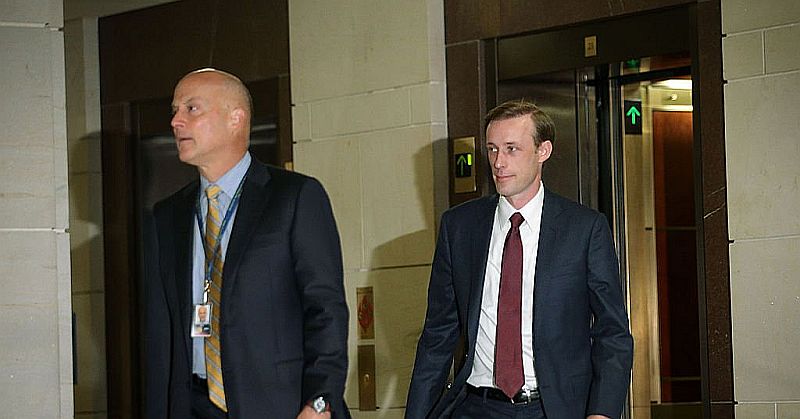 There have been several instances in recent months providing evidence that Hillary Clinton is seriously ill with a disease affecting her mental and physical health.

Images were obtained showing what seems to be a struggling Hillary trying to get up a short flight of stairs, assisted by secret service agents. Then there is also the strange man who appeared next to Hillary holding a syringe of diazepam, a medication used for people having mental issues by treating chemical imbalances in the brain.

We have also reported on the strange revelation that Huma Abedin, Hillary’s top aide, acted as a kind of “Naptime Secretary” while at the State Department, according to newly released emails.

Now, there is even more information indicating that something could be seriously wrong with Mrs. Clinton. While working at the State Department, her top foreign policy adviser was also doing research on Alzheimer’s and Parkinson’s diseases.

Jake Sullivan, Hillary Clinton’s top foreign policy adviser, extensively researched the drug Provigil while working for her at the State Department in 2011.

Sullivan, then Secretary Clinton’s deputy chief of staff, informed Clinton in an email that Provigil, a drug commonly used to treat narcolepsy and other sleep-wake disorders, “was invented by the military.”

“Provigil is used to treat excessive sleepiness caused by narcolepsy or shift work sleep disorder (sleepiness during scheduled waking hours among people who work at night or on rotating shifts),” he wrote in a previously released email.

Sullivan also noted that Provigil is often prescribed to treat “excessive sleepiness in patients with Parkinson’s, Alzheimer’s and multiple sclerosis.”

He stated that Modafinil — the drug’s original name — “gained attention in the medical community because it is the first effective stimulant with no significant potential for abuse” before explaining “it can be used for two to three day stretches at a time, with few known side effects and little risk of addiction.”

This now raises some very important questions that need to be answered (and no, asking these questions about her health is NOT sexist, I can’t believe I even had to add that disclaimer).

Why was Sullivan researching these medications in his official capacity? He used State Department emails and conducted what appears to be very well documented research. This wasn’t just for some random question that Hillary had, at least I would not buy that story; especially not with all the health questions that are now surrounding the former Secretary of State.

The second question is, who is “H”? I’ve got an idea, Hillary’s top aide herself: Huma Abedin.

Thirdly, if Hillary does have any disease such as MS, Alzheimer’s, or Parkinson’s, is that not something that the American people must know about a candidate for President of the United States? It’s a perfectly legitimate question to ask (at least, it was in 2008 when John McCain was running and similar questions circulated the news on a daily basis).

But we are dealing with Hillary Clinton, the chosen one; we must not dare to question something as her mental and physical health. It’s not like her entire decision making process is at the core of the concern here? Is not the overall health of someone who could be the next President a concern that any rational person should have?

Or am I just part of a right-wing conspiracy?