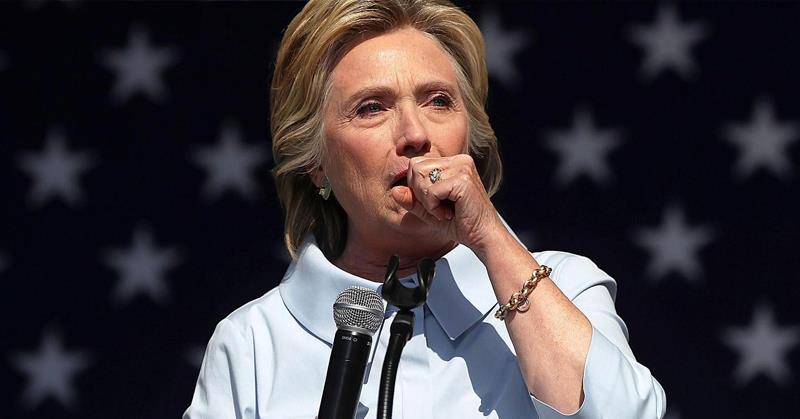 Throughout the 2016 Presidential campaign, we have witnessed numerous tricks by the magician Hillary Clinton. She has made tens of thousands of e-mails, indictments, and objective debate moderators suddenly disappear.

Unfortunately, for this Democratic-Houdini, she is unable to make her failing health and symptoms disappear.

Since Clinton is not well enough to lead and command the country, and each public appearance confirms that fact, she has decided to make herself disappear.

As reported by American Thinker:

…[A]part from the two events this Monday and the 90-minute debates on the 9th and 19th, Hillary will not show her face for twenty days.

No chance for the cameras to catch her chronic cough, her exotropia (failure of her eyes to converge when looking outward), her dyskinesia (involuntary head movements in response to lights and noise), her tremors, her freezes, her falls. And she’ll have plenty of time to take drug holidays – structured treatment interruptions – to increase the effectiveness of her medications when she resumes treatment just before a debate.

The failure to campaign in October is without precedent in any American presidential election in living memory. Even in 1944, FDR, in failing health and confined to his wheelchair, campaigned vigorously in October.

This is really Clinton’s only option, given the state of her health.

There is no Attorney General her husband can meet with on a tarmac to get rid of her health problems, no software to swipe Clinton’s personal health clean, no previous Secretary of State upon whom to place blame.

Houdini Hillary has created a number of illusions this campaign cycle but ultimately, a hard fact remains that she cannot dodge: she is not in good enough health to serve as our president.

Of course, she’ll look for and find disingenuous and unprofessional physicians to create false reports because she wants the presidency.

She does not want what is best for the American people or this Republic.

She wants her place in the Oval Office and will stop at nothing to get there–even if this means hiding out until election day.

Not surprisingly, CNN and NBC News aren’t reporting on any of this… but that’s an entirely separate article…