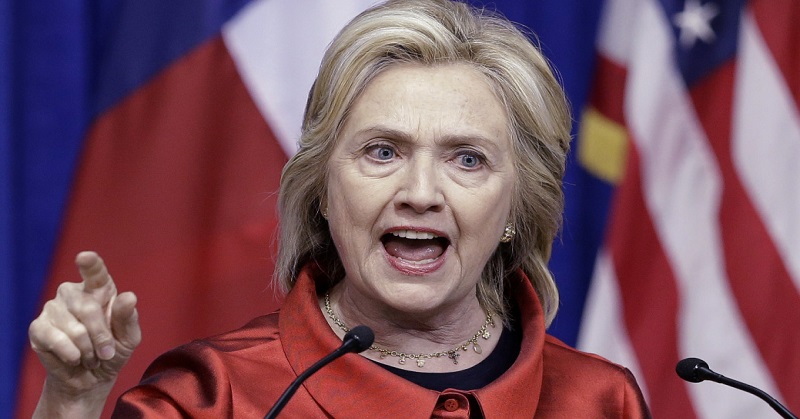 Responding to the massacre of five police officers by a racist black nationalist, Hillary Clinton took the rather interesting tactic of blaming white people and police officers for the tense confrontations between law enforcement and black men.

During a CNN interview on Friday, Clinton failed to mention – even once – the culpability that anyone in the black community may share for the interactions that sometimes turn violent and deadly. Rather, she pointed the finger at police and White America.

“I will call for white people, like myself, to put ourselves in the shoes of those African-American  families who fear every time their children go somewhere, who have to have ‘The Talk,’ about, you now, how to really protect themselves [from police], when they’re the ones who should be expecting protection from encounters with police,” Clinton told CNN’s Wolf Blitzer.

“I’m going to be talking to white people, we’re the ones who have to start listening to the legitimate cries coming from our African-American fellow citizens,” she said.

“We’ve got to figure out what is happening when routine traffic stops, when routine arrests, escalate into killings… Clearly, there seems to be a terrible disconnect between many police departments and officers and the people they have sworn to protect,” she said.

Federal policing guidelines are needed because “we have 18,000 police departments… [some of which need more training to] go after systemic racism, which is a reality, and to go after systemic bias,” she said, Breitbart is reporting.

She was echoing a tweet she issued from that morning:

White Americans need to do a better job of listening when African Americans talk about the seen and unseen barriers you face every day.

Clinton has been pandering to the African American community since she announced her run for President. Nowhere is this blatant race-baiting pandering more evident than in her Twitter feed over the last 48 hours:

White Americans need to do a better job of listening when African Americans talk about the barriers they face.https://t.co/rmzeEG5HoC

Alton and Philando's deaths are the latest in a long, painful litany of African Americans killed in police incidents—123 so far this year.

There is clear evidence that black Americans are more likely to be killed in police incidents than any other group. We have to do better.

Too many African American families are mourning. Too many young black men and women have been taken from us. pic.twitter.com/arkjOeLu7G

Clinton suggested that people who disagree with her agenda are racists. “There is so much more to be done… we can’t be engaging in hateful rhetoric or incitement of violence, we need to be bringing people together … we need more love and kindness.”

She also has been actively courting the anti-Second Amendment lobby, trying to score political points off the death of police officers to push gun control.

"When the 24-hour news cycle moves on, I won’t.” —Hillary on preventing gun violence and addressing racial injustice

“Gun violence is ripping apart people’s lives. They are trying to tell us. We need to listen.” —Hillary

RT if you're one of them. #DisarmHate