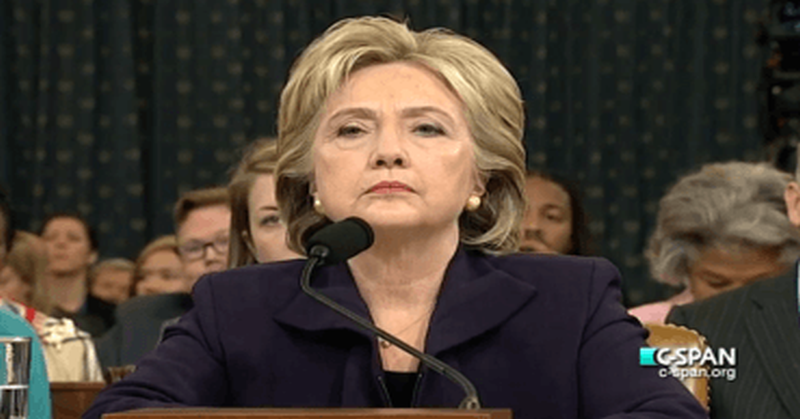 Hillary Clinton just committed a major gaffe. And it’s going to cost her at the polls.

Hillary Clinton told an audience of donors Friday night that half of Donald Trump’s supporters fall into “the basket of deplorables,”

“To just be grossly generalistic, you can put half of Trump supporters into what I call the basket of deplorables,” Clinton said. “Right? Racist, sexist, homophobic, xenophobic, Islamaphobic, you name it.”

She added, “And unfortunately, there are people like that and he has lifted them up. He has given voice to their websites that used to only have 11,000 people, now have 11 million. He tweets and retweets offensive, hateful, mean-spirited rhetoric.”
[…]

Jason Miller, a Trump spokesman, said in a statement that Clinton “ripped off her mask and revealed her true contempt for everyday Americans.”

The remarks released a firestorm on twitter, soon culminating into #BasketofDeplorables.

Wow, Hillary Clinton was SO INSULTING to my supporters, millions of amazing, hard working people. I think it will cost her at the Polls!

Campaign manager, Kellyanne Conway reminds everyone that Clinton promises to play fair but refuses to and later called her remarks “slandering.”

One day after promising to be aspirational & uplifting, Hillary insults millions of Americans. #desperate https://t.co/OrBkowI4Sd

Hillary, placing people in “baskets”, slandering them but admitting after 8 yrs, they are “desperate for change.” https://t.co/OrBkowI4Sd

Given that there’s been entire books dedicated to Hillary’s deplorable actions it’s a new low, even for her, to attack 100,000,000 Americans

Conservative radio host had some advice for Trump: don’t let anyone forget this.

4 @realDonaldTrump: Every speech should start “So, which half of you are in the #basketofdeplorables?” In every TV hit you should reference.

Weekly Standard editor, Bill Kirstol, who is well known as a Trump critic, joined in to defend him for once.

Hillary Clinton’s creed: “All men are created equal” — except for those I’ve consigned to the basket of deplorables, who are irredeemable.

Even the dems had to admit she was out of line.

Clinton is getting WAY too desperate this early in the campaign. The fact that she would slander 25% of Americans shows exactly what she’s really about.

We already knew she was a liar and a cheat.

Now we know what she really thinks about the common people, too.