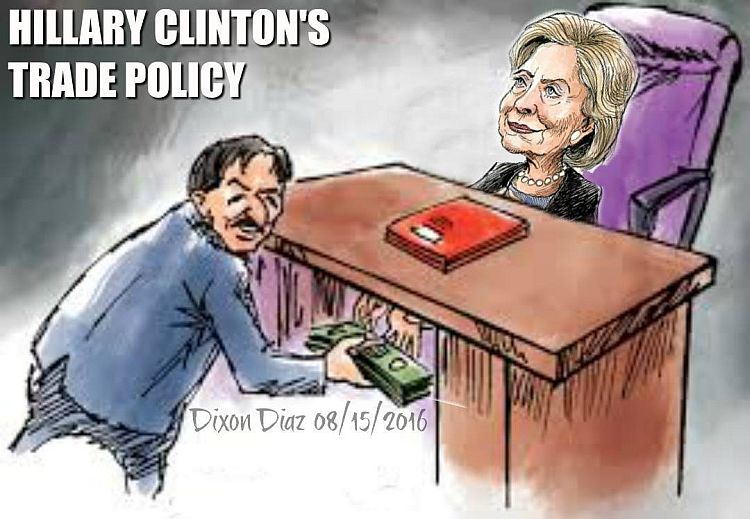 Hillary’s got all sorts of ways she could make more money through sketchy trade deals. She’s already been able to rake in quite a bit from foreign countries through favors given at while she was at the State Department.

Seth Connell reports that the corruption of Hillary Clinton spreads from sea to shining sea. From the governor’s mansion in Arkansas, to the halls of the White House, to the streets of Benghazi, Libya, to the palace of the Saudi royal family.

At this point, you probably would not be terribly surprised, but would still be rather dumbfounded.

It is at this point that I can tell you that these connections do exist, and they are absolutely damning.

First, let us look at the connections of a foreign government. Which government is this? No, it’s not just the Saudis, but someone who has become a kind of boogeyman whom she and her campaign can claim is supporting Donald Trump.

That country is the Russian Federation.

As the Wall Street Journal reported:

What could possibly go wrong?

Soon, dozens of U.S. tech firms, including top Clinton Foundation donors like Google, Intel and Cisco, made major financial contributions to Skolkovo, with Cisco committing a cool $1 billion. In May 2010, the State Department facilitated a Moscow visit by 22 of the biggest names in U.S. venture capital—and weeks later the first memorandums of understanding were signed by Skolkovo and American companies.

By 2012 the vice president of the Skolkovo Foundation, Conor Lenihan—who had previously partnered with the Clinton Foundation—recorded that Skolkovo had assembled 28 Russian, American and European “Key Partners.” Of the 28 “partners,” 17, or 60%, have made financial commitments to the Clinton Foundation, totaling tens of millions of dollars, or sponsored speeches by Bill Clinton.

Other Russians tied to this project also sent money to the Clinton Foundation.

Andrey Vavilov, the chairman of SuperOx, which is part of Skolkovo’s nuclear-research cluster, donated between $10,000 and $25,000 (donations are reported in ranges, not exact amounts) to the Clinton’s family charity. Skolkovo Foundation chief and billionaire Putin confidant Viktor Vekselberg also gave to the Clinton Foundation through his company, Renova Group.

I am beginning to detect a pattern here…

As the Clintons headed up investment in Skolkovo, both the FBI and U.S. Army raised red flags about how such investment could greatly increase the technological capabilities of the Russian military, thus threatening American national security due to an increasingly aggressive Russian State.

In the report originally released by the Government Accountability Institute, it was confirmed that Skolkovo was involved in developing Russia military technologies.

In addition to this, the report also revealed the fact that John Podesta, Hillary’s campaign manager, sat on the board of a company, Joule Unlimited, that received $35 million dollars from the Kremlin. Are you feeling a sense that there’s some major shadiness going on yet?

What is known is that the State Department recruited and facilitated the commitment of billions of American dollars in the creation of a Russian “Silicon Valley” whose technological innovations include Russian hypersonic cruise-missile engines, radar surveillance equipment, and vehicles capable of delivering airborne Russian troops.

In 2016, we have reached a rather peculiar place. A woman who has done nothing but destabilize the world and strengthen powers hostile to the United States is possibly going to be the President. Who could have ever predicted this? Well, I’ll have you know that there are people who predicted this. Those people would be the American Founders.

In James Madison’s Records of the Federal Convention, he summarized the concerns of Elbridge Gerry from Massachusetts about the dangers of foreign involvement in American elections.

Foreign powers will intermeddle in our affairs, and spare no expense to influence them. Persons having foreign attachments will be sent among us and insinuated into our councils, in order to be made instruments for their purposes.

Now, Gerry partially had it right. There is foreign interference going on with U.S. elections. What is now happening, though, is that American politicians are going out of the country and courting such interference.

There have always been moles from foreign governments in the U.S. government, Algier Hiss was one example during the Cold War. But have we ever had such extra-national outreach for foreign interference in domestic affairs? Not that I am aware of, at least.

Why is Hillary doing this? Because it is rather profitable. One need not look further than the Clinton Foundation to see that there are myriad donors to the Foundation that comprise foreign governments; and subsequently, certain actors in these countries have obtained rare privileges “unexpectedly,” getting rare permits for gold mining without Bill Clinton knowing that his brother in law was involved, and the like.

While Donald Trump’s comments that ostensibly invited the Russian government to hack into American email servers were rash and uncalled for, this certainly does not equal the connection that Hillary Clinton has with the Kremlin. Trump’s comments were not a good thing, facetious or not. You don’t invite a foreign power to hack your country’s email servers whether you’re serious or joking.

Nonetheless, it does not appear that Trump has the deep ties to the Kremlin that Hillary does. If Hillary Clinton is elected to the White House, the Kremlin has something better than a mole in the CIA or a nuclear launching station in Cuba. They effectively have direct access to the Presidency through their friendly crony, criminal mastermind known as Hillary Rodham Clinton.