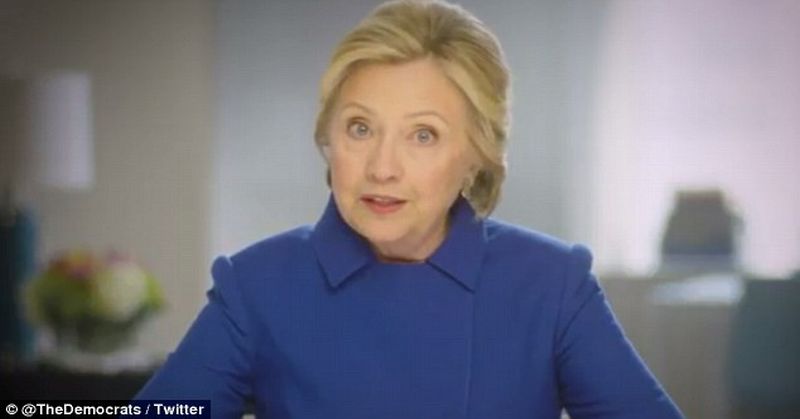 Hillary Clinton has released a three-minute video in which she encouraged Democrats to resist the Trump presidency, stressed the importance of recent protests, and reminded Americans that she won the popular vote.

“Hello Democrats!” Clinton opens her video with. “Thank you all for coming together to represent our party at its best – united, energized and ready to wage and win the battles ahead.”

She went on to say democrats are “bound together” by values and hopes in spite of their cultural diversity.

NBC News: Hillary To Trump Foes: Keep Up ‘Resistance And Persistence’
Daily Mail: ‘Keep fighting, I will be with you every step of the way’: Hillary surfaces in extraordinary three-minute address to Democrats – which begs the question: Is she running AGAIN?

Daily Mail reported on much of her prepared speech:

‘Nearly 66 million votes are fueling grassroots energy and activism and everywhere people are marching, protesting, tweeting, speaking out and working for an America that’s hopeful, inclusive and big-hearted,’ she said with great pleasure.

‘From the Women’s March, to airports where communities are welcoming immigrants, refugees and people of every faith, to town hall meetings where people are speaking up for healthcare, the environment, good jobs and all the other issues that deserve our passionate support,’ she continued, naming the places where progressive activists have taken on Republicans and Trump as of late.

She used a new tagline, which she and the Democrats tweeted out too.

‘Let resistance plus persistence equal progress for our party and our country,’ she said.

Clinton’s campaign motto had been ‘Stronger Together’ and she preached togetherness six times in the three minute spot. 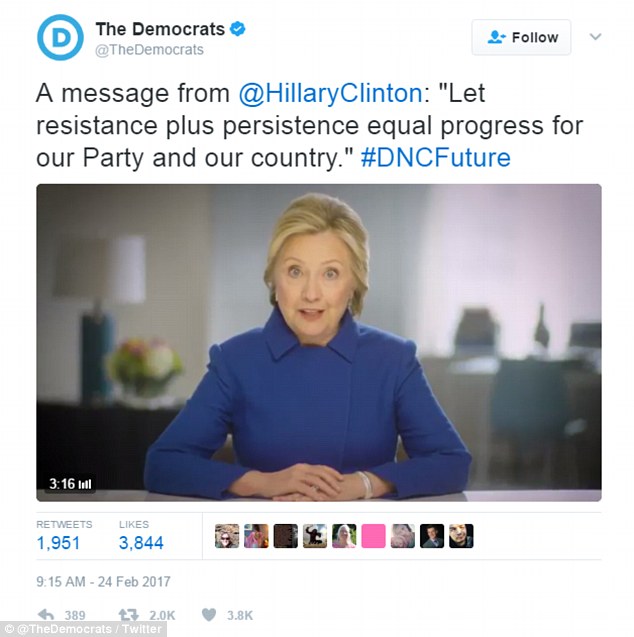 You can listen to the full message below. Can democrats possibly stomach more of Clinton’s “fighting,” when they know she clearly has a problem with winning?

Dems seemed unwilling to remark on whether they’d give Clinton another chance.

But would Democrats really give Clinton a take three?

Democratic National Committee chair candidates were asked this question during Wednesday night’s CNN debate, as the brought up several times throughout the night the fact Clinton had won the popular vote.

None of the candidates would say yes outright.

‘I think the important thing that we remember as the Democratic Party is that we’re here for small-D democracy,’ said DNC chair candidate Sally Boynton Brown, who runs the state party in Idaho. ‘If Hillary Clinton wants to put her name on the ballot again, that’s her decision.’

Really, Mrs. Clinton. At this point, don’t you think your party is “stronger” without you?