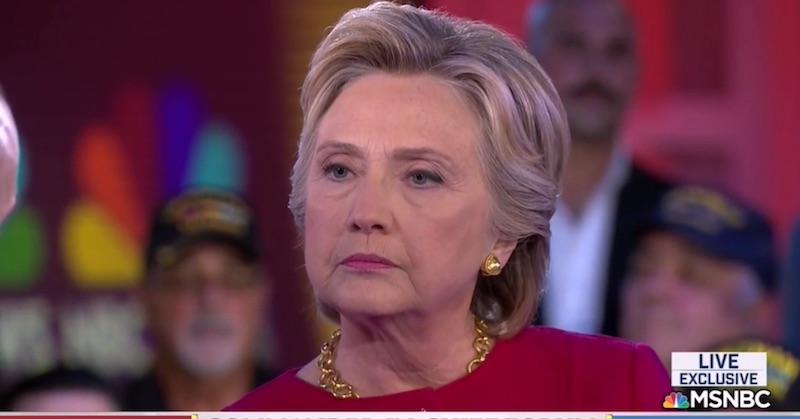 With all of this talk about the Donald Trump video that was released, it would have been best if Hillary Clinton had just stayed out of it. You know, since her husband was (is?) a serial philanderer with several non-consensual sexual encounters under his belt (READ: rape).

But of course, she felt the need to chime in, which angered a lot of people who realize that she is throwing rather large stones from a rather delicate glass house. This was made clear at an Ohio State University rally, when a group of protesters showed up just to remind her of her husband’s past (and illegal) indiscretions.

While colleges and Universities are the epicenters of liberal indoctrination, there are some students who have managed to keep a shred of sanity, like Trey Odell, who refuses to vote for Hillary Clinton simply because she’s a woman.

Hillary is at OSU today. Going to go just to heckle her #HillaryForPrison

Wherever there are controversial politicians, there are sure to be protesters. Hillary is one professional politician that people just love to hate, and the truth is that she just makes it so easy.

Protesters at the OSU rally gathered and carried “Bill Clinton is a Rapist” signs, wore “Hillary For Prison” shirts and waved a flag saying “Come And Take It.”

They began a rousing chant of “Bill Clinton Is A Rapist,” which you can see below.

This comes after Breitbart interviewed Bill Clinton rape victim Juanita Broaddrick in a heart-wrenching video that will leave you hot under the collar.

Broaddrick cries as she recounts the horrifying night when Clinton violated her in the worst way imaginable. At one point during the interview, another Clinton victim Kathleen Willey went to comfort a sobbing Broaddrick.

Hillary Clinton set out to destroy these women after finding out that her husband was sexually involved with them, but she has the gall to feign outrage at what Trump said?

The nation needs to be reminded that Bill Clinton has a zipper problem, and it has ruined lives, all thanks to his “loving” wife.