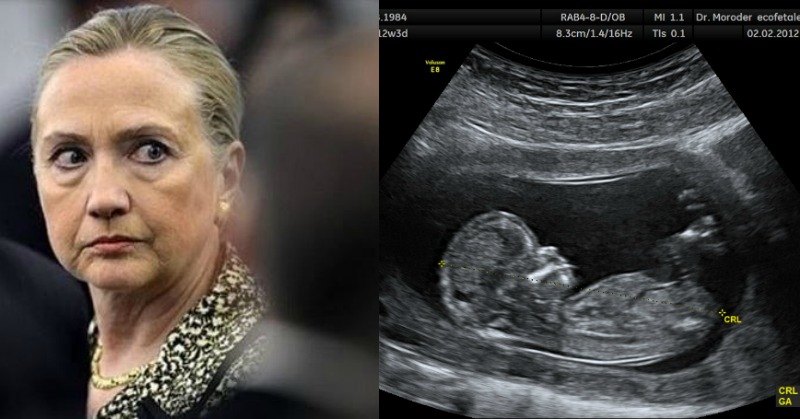 At the third and final presidential debate, Hillary Clinton attempted to defend the indefensible murder of innocent babies by citing the “life and health of the mother,” particularly in regard to partial birth abortions. Aside from being morally reprehensible, the facts don’t back her claims up.

“I strongly support Roe v. Wade,” Clinton said, “which guarantees a constitutional right to a woman, to make the most intimate, most difficult, in many cases, decisions about her healthcare that one can imagine.”

Debate moderator Chris Wallace asked Clinton how far a woman’s right to abortion goes, pointing out that she had said unborn babies have no constitutional rights and that, as a U.S. senator, she voted against a ban on late-term partial birth abortions.

In response, Clinton refused to use the word “baby” and cited the “health of the mother” in her explanation of why it’s all right to murder innocent children:

Roe v. Wade very clearly sets out that there can be regulations on abortion, so long as the life and the health of the mother are taken into account. And, when I voted, as a senator, I did not think that was the case.

The kinds of cases that fall at the end of pregnancy are often the most heartbreaking and painful decisions for families to make. I have met with women toward the end of their pregnancy get the worst news one can get: that their health is in jeopardy, if they continue to carry to term, or that something terrible has happened or just been discovered about the pregnancy.

Trump responded by describing how in gruesome late-term abortion procedures — which liberals work hard to keep out of the American consciousness so that they can continue to murder babies — in which a baby is “ripped” from the uterus, sometimes after being ripped apart limb by limb.

Clinton called Trump’s description untrue and “scare rhetoric.” But it is true, unlike her assertion that the health of the mother is the main reason why women get abortions late in their pregnancies.

The study debunked the claim that most late-term abortions are done for the health of the mother. Johnson concluded:

For many years, abortion-rights advocates have asserted that abortions after 20 weeks are performed because of maternal health complications or lethal fetal anomalies discovered late in pregnancy.

However, wider data from both the medical literature and late-term abortion providers indicates that most late-term procedures are not performed for these reasons.

Clinton is all about the money, though, and as we found out via the undercover Planned Parenthood videos last year, the murderous organization gets a lot of money for the body parts of aborted babies.