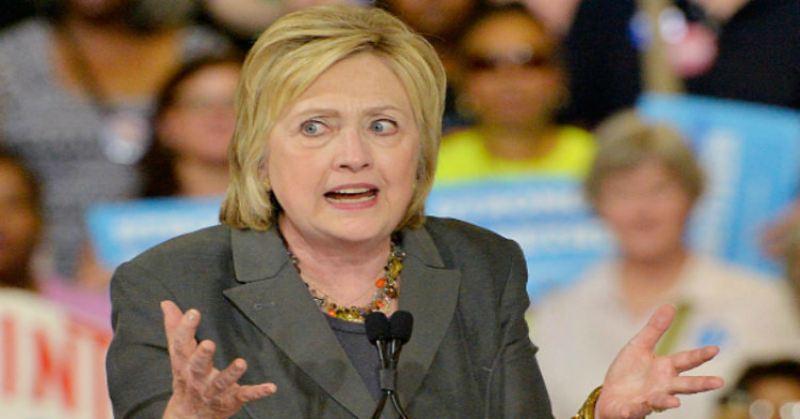 If causing people to roll their eyes were an Olympic sport, Hillary would undoubtedly be the undefeated Gold medalist for Team USA.

See what I did there?

If you think THAT was bad, then you might want to hear the way Hillary Clinton used America’s most successful athletes to bash Donald Trump.

Clinton: If Team USA was as fearful as Trump, Phelps and Biles “would be cowering in the locker room” https://t.co/i5PGLIHbTv

“Mr. Trump may talk a big game on trade, but his approach is based on fear, not strength. Fear that we can’t compete with the rest of the world, even when the rules are fair. Fear that our country has no choice but to hide behind walls. If Team USA was as fearful as Trump, Michael Phelps and Simone Biles would be cowering in the locker room, afraid to come out and compete. Instead, they’re winning gold medals. America isn’t afraid to compete.”

Did that make you groan? If so, you’re not alone. Twitter users from the media responded with largely disapproving comments, as recorded by the Washington Examiner.

“These speech writers are so terrible,” said the Washington Free Beacon’s Elizabeth Harrington.

Sports Illustrated’s Richard Deitsch added, “This is a terrible tweet.”

The Olympic games are a huge event that garners the interest in people around the world. Candidates want to capitalize on the attention it receives by incorporating references to the event within their speeches, but this one fell flat in a spectacular fashion.

If I may give the candidates some unsolicited advice, I’d like to suggest you don’t use the names and achievements of these amazing athletes to bash each other. Instead, show some support for the fantastic men and women who are representing our country on the world stage. Brag about how many medals (especially gold) they’ve won, talk about how our athletes don’t need to take drugs to be the best in the world, and other similar, unifying statements. What Hillary did was just crass, petty and divisive. Phelps and Biles didn’t work as hard as they did so their names could be used to malign someone else.