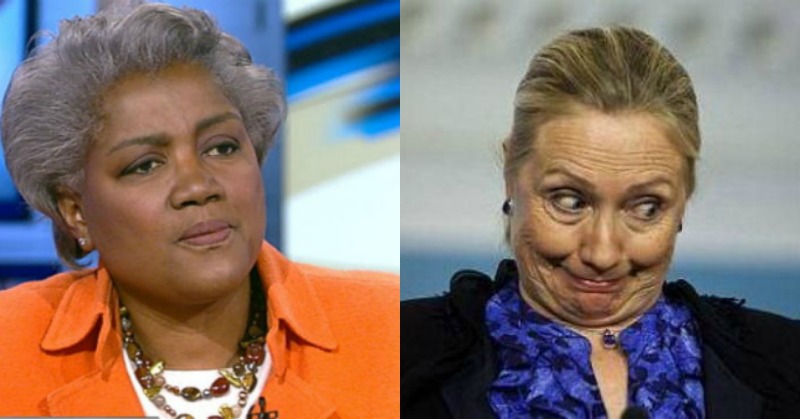 Democrat presidential nominee Hillary Clinton is going to have to do some serious under-the-bus throwing to get herself out of this one. A recent WikiLeaks dump revealed that the Clinton campaign went over Clinton’s answer to a debate question with Donna Brazile, who was, at the time, a CNN contributor.

As we know now from the WikiLeaks releases, Brazile fed debate questions to the Clinton campaign. One of those questions was about the death penalty — something that Brazile felt concerned about Clinton’s potential response to.

Clinton’s Director of Media Planning, Betsaida Alcantara, responded to Brazile’s email, noting that “From time to time I get the questions in advance,” with Clinton’s proposed response to the question, which is pretty clearly an attempt to go over the answer with Brazile.

Take a look at Clinton’s response to the question, as emailed by Alcantara, below, courtesy of Zero Hedge:

*YOU have said recently that YOU support the death penalty. Can YOU clarify YOUR position?*

–  For the federal government, no, I don’t think we should abolish the death penalty entirely. But I do think it should be reserved as an option for the most serious crimes, or for acts of terrorism, like the Boston Marathon bomber. Remember, I was the Senator from New York on September 11. And I was First Lady when the Oklahoma City bomber killed 168 people, including 19 children. I met their parents. I saw what was done. Because of acts of terror like these, I think about the federal death penalty differently.

–  But we know the death penalty has too often been applied in a discriminatory way at the state level. African-Americans are far more likely than whites to face the death penalty than whites. States have almost certainly executed inmates who were innocent of the crimes for which they’d been put on death row. And it’s profoundly wrong for states to ‘experiment’ with different cocktails of lethal injection drugs because of shortages. Our Constitution is supposed to protect against cruel and unusual punishment. And the Supreme Court recently even stayed an execution because of this issue.

–  So I think states need to look carefully at whether they should continue the policy. At how it’s been applied, and whether there are discriminatory effects—particularly for African-Americans. And to do more to allow inmates to pursue claims of actual innocence. There is nothing more unjust and unacceptable than imposing the death penalty on someone who is innocent of the crime. And I want to incentivize every state to put in place procedures for inmates to petition for post-conviction DNA testing. 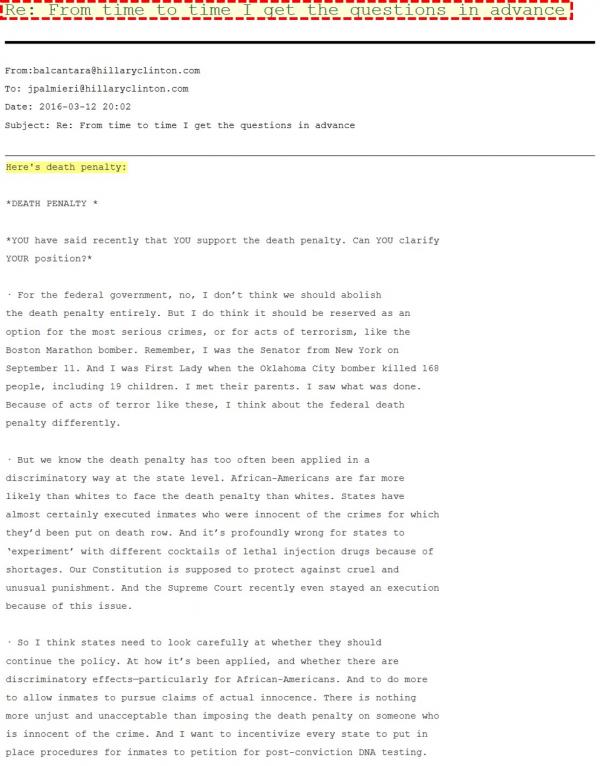 And here’s the original email from Brazile: 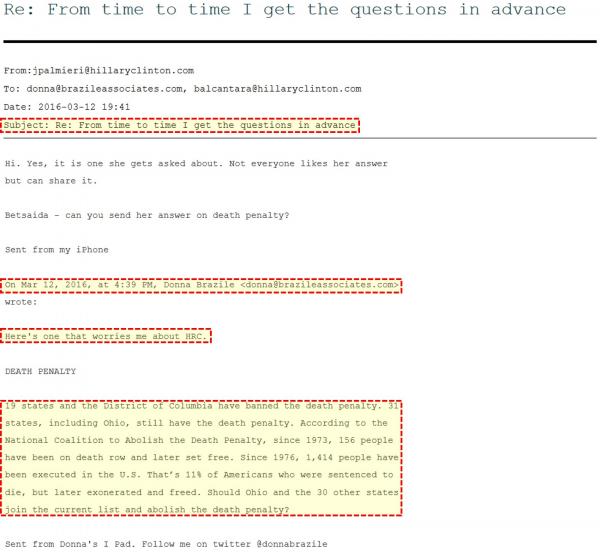 But you guys, don’t be mean. Brazile’s a Christian woman! Yeah, she actually told Megyn Kelly, “you know as a Christian woman I understand persecution, but I will not sit here and be persecuted because your information is totally false.”

The poor, persecuted Christian woman is being called out for lying and cheating — which isn’t very “Christian,” is it Brazile? Maybe the Russians took control of her brain and forced her to sacrifice any semblance of integrity and morality? The intrigue!