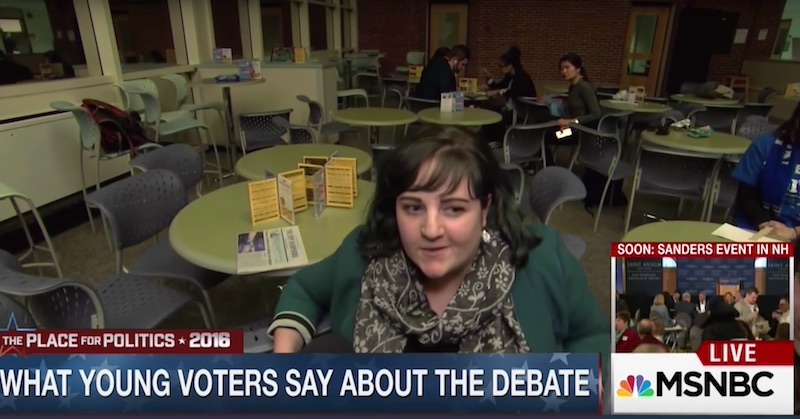 Young women are turning away from Hillary Clinton and her brand of whiny feminism.

When Bernie Sanders said that Clinton was part of the political “establishment,” she roared back that the claim is simply impossible merely because she is a woman.

“Honestly, Senator Sanders is the only person who I think would characterize me – a woman running to be the first woman president – as exemplifying the establishment,” she said. Watch the video, and you’ll see Bernie raise his eyebrows in a “seriously?” moment.

When MSNBC anchor Tamron Hall went out into the crowd after the New Hampshire debate and began asking “millennial” young people about Hillary’s claim, she discovered they’re pretty disgusted with Hillary playing the “gender card,” The Washington Free Beacon is reporting.

“I also am a woman. I also face discrimination as being a woman. Her feminism does not represent my feminism, and I think it’s really important to differentiate that,” one young woman said. Her complaint is a common one among young women and reveals a generational divide within the Democratic Party.

Another respondent said that Clinton’s gender does not automatically make her the best candidate.

“You have to realize that, you know, everybody’s human and … you have to go for who has the best ideals,” she said. “Just because she’s a woman doesn’t necessarily make her the best candidate.”

Hall expressed shocked at the responses she received to her questions. Although it is well known Clinton’s opponent, Sen. Bernie Sanders (I.,Vt.) polls better with young voters, Hall did not expect young women to react negatively to Clinton’s use of gender.

“Here you are in New Hampshire, this progressive college environment, and young woman after young woman really shrugging it off and taking issue with the fact that Hillary Clinton brought it up,” Hall said. “I thought that was fascinating. It blew me away. Of all the things last night, I didn’t see that coming.”

In 2008, it’s reported that Hillary decided not to play the “gender card” in her campaign – and she lost. This election season, she’s repeatedly mentioned how awesome it is that she’s a female, trying to secure women Democratic voters away from Bernie.

She has taken to calling her opponents sexist for saying the most innocuous things. In October, when Bernie Sanders suggested people stop yelling at each other about gun control, Hillary tried to play that off as a sexist attack.

“I’ve been told to stop, and I quote, shouting about gun violence,” Clinton said in October. “Well, first of all, I’m not shouting. It’s just when women talk, some people think we’re shouting.”