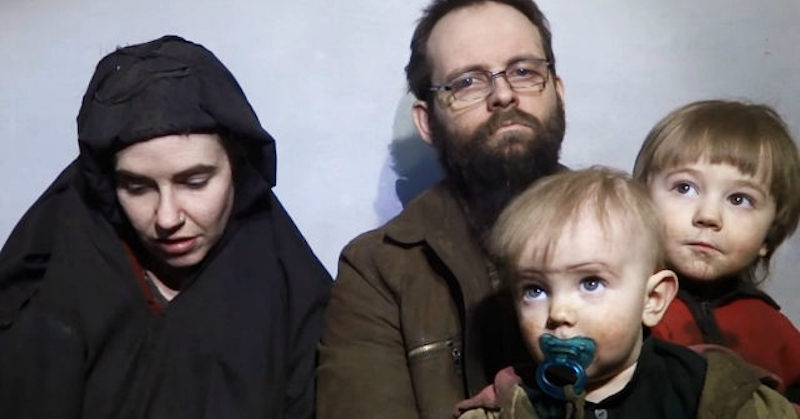 A Canadian family who were kidnapped while hiking through Afghanistan have been shown in another video release by the terrorists.

The video also shows two young children seated next to American Caitlan Colean and Joshua Boyle, presumably their boys, born during captivity. Coleman was seven months pregnant at the time of their capture.

“We understand both sides hate us and are content to leave us and our two surviving children in these problems,” Coleman says in the video, as reported by Reuters. “But we can only ask and pray that somebody will recognize the atrocities these men carry out against us as so-called retaliation in their ingratitude and hypocrisy.”

“My children have seen their mother defiled,” she added ominously, as the children sat in Boyle’s lap. Also ominous: she referred to the boys as her “surviving children,” providing a hint that some have already died.

“They want money, power, friends. You must give them these things before progress can be made,” she said of her captors in the Haqqani Network, a notorious hostage-taking criminal gang allied with the Taliban. Reuters explains that the “friends” she referred to are three senior Haqqani members held by the Afghan government.

The UK Daily Mail adds that Boyle said his captors are “frightened by the idea of further execution” of Taliban and Haqqani prisoners by the government in Kabul.

Coleman then buttressed her husband’s remarks by pleading, “I ask if my government can do anything to change the policies of the Afghan government to stop their policy of executing men before these men start executing their prisoners.”

At another point in the video, she more explicitly states that the Haqqanis will “retaliate against our family,” “do us harm,” and “punish us” if their demands are not met.

“We have waited since 2012 for somebody to understand our problems. We can only ask and pray that somebody will recognize the atrocities these men carry out against us as so-called retaliation in their ingratitude and hypocrisy,” Coleman said, evidently reading from a script, as the UK Guardian notes.

Coleman pleads with Barack Obama: “Please don’t become the next Jimmy Carter. Just give the offenders something so they and you can save face, so we can leave the region permanently.”

As the Daily Mail notes, Coleman is wearing a burka in the video, with the veil pulled back to expose her face. Boyle is described as “pale and tired.” Coleman was forced to wear a burka in previous hostage videos, while her mother also donned a Muslim headscarf in a video appeal for her daughter’s release sent by the family to Taliban leaders last year.

Taliban officials confirmed the authenticity of the video, which they said was recorded several months ago. (Coleman specifically states it is December 3rd at the beginning of the tape, but that might not be accurate.) It was delivered to U.S. and Canadian authorities, as well as uploaded to YouTube for public display on Monday night after one of the Haqqani prisoners was sentenced to death.

According to the Daily Mail, the Canadian government almost had a deal for Boyle’s release in place, but he refused to leave Coleman and the children. The New York Times speculates efforts to secure the couple’s release were harmed by the U.S. drone-strike killing of Afghan Taliban leader Mullah Akhtar Muhammad Mansour in May.

“Certainly when Americans are taken captive, this becomes an immediate priority for us. We are paying extraordinarily close attention to that. We always do. I won’t get into too many details with that. But I am satisfied that we are doing everything we can at this juncture to understand who took them and try to bring them back,” said U.S. Army General Joseph Votel, head of Central Command, at a Pentagon briefing on Tuesday.

“We are deeply concerned for the safety and wellbeing of Joshua Boyle, Caitlan Coleman and their young children and call for their unconditional release,” said Canadian Department of Global Affairs spokesman Michael O’Shaughnessy.

The Guardian notes that the U.S. State Department “did not respond to a request for comment.”

As for why a man and his pregnant wife would be backpacking through Afghanistan in 2012, the Daily Mail quotes some relatives describing them as “well-intentioned but naive adventure seekers.” They had already trekked through Russia, Kazakhstan, Tajikistan, and Kyrgyzstan before arriving in Afghanistan.