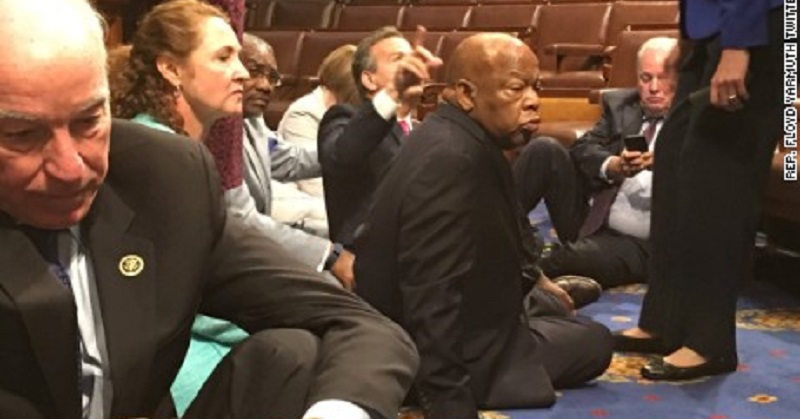 While they’re on their Fourth of July recess, House Democrats declared they’re going to take their “sit-in” sideshow on the road, with all members ordered to declare a “national day of action” on Wednesday.

The purpose? Not to actuallydo

anything, merely to point fingers at Republicans who refuse to bow to pressure to destroy due process in the United States.

In demanding that Americans placed on a “no-fly” or terrorism watch list be automatically prohibited from exercising their Second Amendment, Democrats expose how willing they are to bow to tyranny.

But Democrats are hoping the American people won’t notice that tiny detail.

“Our sit-in showed that the Republican Leadership can no longer ignore the epidemic of gun violence,” the Democrats wrote. “A movement was born and will only continue to grow.”

And what exactly are they proposing Hose Democrats do in their “day of action? Anything.

“Whether it [is] a press conference, roundtable, or telephone town hall, we encourage you [to] host an event showing that Democrats in Congress will keep up the fight against gun violence,” the lawmakers wrote. “Local partners including survivors, law enforcement and faith leaders can be excellent partners and can help carry our message even further.” The Hill reports:

The Democrats are pushing two separate proposals: One to bar gun sales to those on the FBI’s terrorist watchlists; and another to expand background checks on prospective buyers.

Republican leaders have rejected those proposals, arguing that they would infringe on Second Amendment rights. They’re focusing their Orlando response on efforts to fight terrorism, citing the shooter’s invocation of terrorist group ISIS amid the attack.

That response has infuriated Democrats, who stormed the House floor Wednesday morning and commandeered it with speeches and chants for 25 hours. Many Democrats, including House Minority Leader Nancy Pelosi (D-Calif.), never slept.

“Let me be really clear. We are not going to take away the constitutional rights of law-abiding Americans,” Ryan said Thursday, just before the protest ended.

The Democrats acknowledge that their favored gun reforms are almost certainly going nowhere in the GOP-controlled Congress. But they’re hoping the more aggressive tactics they’ve employed — and the national attention those tactics have attracted — will bring like-minded voters out to the polls on the Democrats’ side in November.