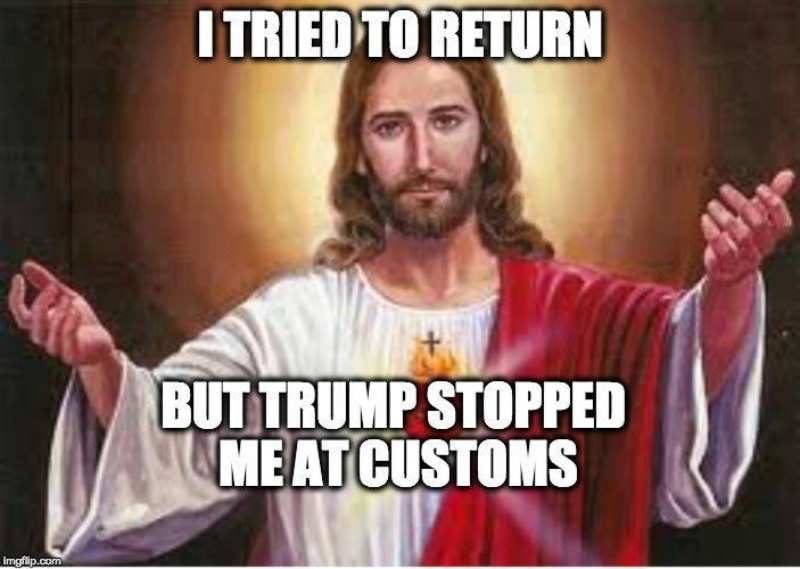 Leftists have disgustingly used Christianity in an effort to spread their farcical narrative about President Donald Trump’s recent executive order temporarily restricting entry to the U.S. from those in several high-terror-risk nations.

The meme shows a picture of Christ and reads, “I tried to return. But Trump stopped me at customs.”

Once again, the Left tries to use an emotional appeal that is completely devoid of facts and logic.

First, I thought the Left said this was a “Muslim ban.” In their offensive hypothetical, if Jesus was stopped at customs because of the EO, it wouldn’t be a “Muslim ban” then, would it?

Second, the fact that they feel emboldened enough to use an image of Christ in this way just shows a major difference between Christianity and Islam. Christians and Muslims tend to react quite differently in cases like this.

The Left regularly mocks and “appropriates” Christian imagery but wouldn’t dare to do the same with Islam for fear of violent retribution. Christians may not like it, but Leftists can breathe easy knowing that they aren’t anywhere near as likely as Muslims to react violently because of it.

Perhaps the Left should make a meme about their liberal savior, former President Barack Obama, and how Christ would have a tough time now should he try to come through Cuba with the end of the wet-foot/dry-foot policy. If he came through Iraq in 2011 — no-go there, either.

Moreover, I’m going to go out on a limb and say that Christ would be able to return, no matter what — in any case.

Finally, I’d bet that these Leftists lock their homes, cars, maybe even have an alarm system, etc.

If they think it’s such a good idea to let these people in, perhaps they should open up their homes to them, and anyone else in need for that matter.

Yeah, I don’t see that happening.

There are ways to help people that don’t involve putting millions of Americans in danger. Beyond that, we’re not the only country in the world that can do so and as Trump showed recently, there are options, such as safe zones, that we can work with countries in the Middle East to implement.

Also, perhaps the Left should consider helping their neighbors right here in America — legal American citizens — that are struggling, instead of bleating on about throwing our doors open to the rest of the world.

Take a look at one of the comments under the meme: 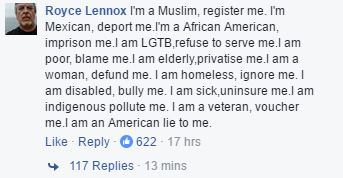 “I’m a Muslim, register me. I’m Mexican, deport me. I’m a African American, imprison me. I am LGTB,refuse to serve me. I am poor, blame me. I am elderly, privatise me. I am a woman, defund me. I am homeless, ignore me. I am disabled, bully me. I am sick, uninsure me. I am indigenous pollute me. I am a veteran, voucher me. I am an American lie to me.”

Ah, more identity-politics lies from the Left. That sure worked out well for them in 2016. Oh wait…