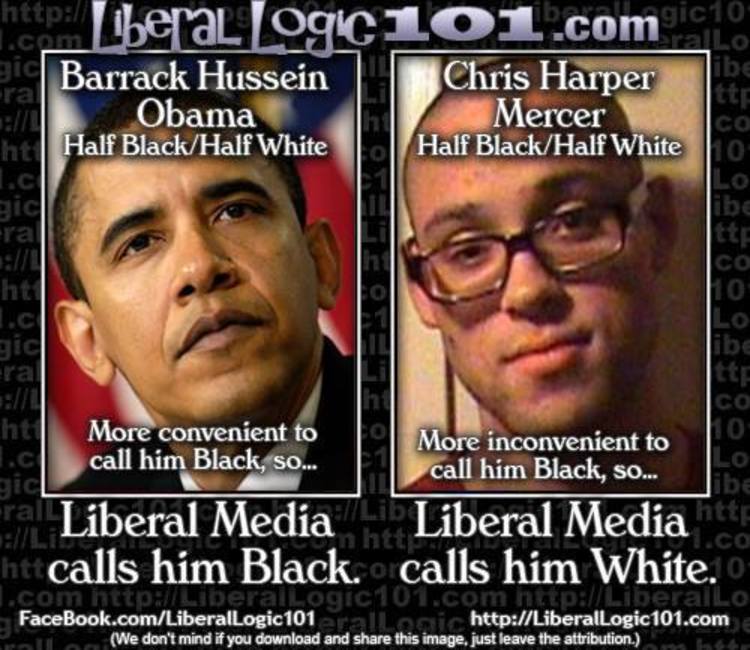 The Los Angeles Times has labeled the Oregon shooter as having “white supremacist leanings” even though the shooter was black. The shooter identified as “mixed race” and reportedly had a black mother.

Quoting an alleged anonymous source in law enforcement, the paper wrote, “A federal law enforcement source familiar with the investigation said, though, that authorities had obtained some of Harper-Mercer’s writings, as well as a note he left behind, suggesting that he supported white-supremacist causes and opposed organized religion.

He also liked to discuss military history, the official said.”

Regarding the race of the shooter and his motivations, the Daily Beast reported that the shooter admired the black Roanoke shooter who expressed racial motivations for his actions. They also wrote, “The father is Caucasian, Evans said, while Mercer’s mother, Laurel Harper, is black.”

The absurdity and apparent lack of an actual knowledgeable source in the LA Times article was first pointed out by Daniel Greenfield in FrontPage Magazine. He wrote:

According to the LA Times, Chris Harper Mercer, the Oregon killer, was a “White Supremacist”.

One slight problem. Mercer identified as multi-racial. His mother was black. He doesn’t seem to have even known his father. He identified with black TV killer Vester Lee Flanagan.

Though it is possible that someone resembling the Dave Chappelle character Clayton Bigsby, who was a blind black white supremacist, did exist, we can all agree that it is unlikely.