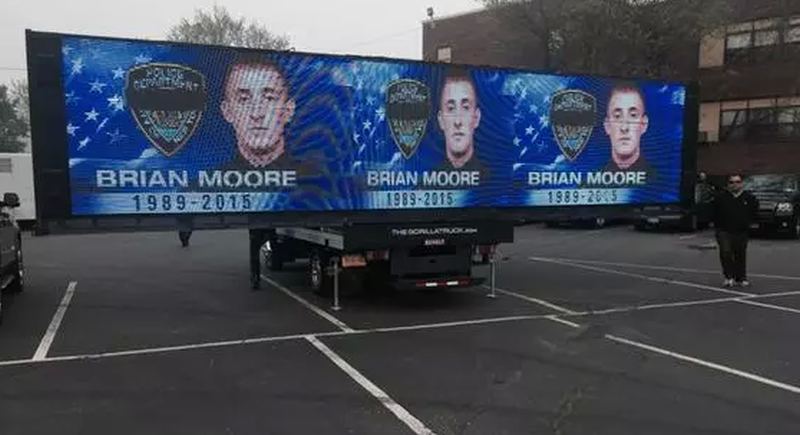 Obama sent three White House officials to Freddie Gray’s funeral. How many do you think were sent to Officer Moore’s funeral?

The White House sent Cabinet Secretary Broderick Johnson, chair of the Obama administration’s My Brother’s Keeper Task Force; Heather Foster, an adviser in the White House Office of Public Engagement; and Elias Alcantara from the Office of Intergovernmental Affairs.

Gray also had a history of run-ins with the law. According to court documents CNN obtained, there were more than 20 criminal court cases in Maryland against Gray, and five of those cases were still active at the time of his death.

As you might expect the White House, which glorifies criminals and villianizes police officers, did not send any officials to Officer Brian Moore’s funeral today.

New York 1 has the story:

Funeral services are planned for later this morning for the NYPD officer shot and killed last weekend in Queens.

Mourners will gather at 11 a.m. at the St. James Roman Catholic Church in Seaford.

Thousands came out for Brian Moore’s wake yesterday on Long Island, including members of the community and police officers from across the country.

Moore’s commanding officer at the 105th precinct in Queens says Moore was a true hero.

“He was every commanding officer’s dream. If I had an army of Brian Moores, there’d be no crime in the city,” said Deputy Inspector Mike Coyle of the NYPD. “He could walk into a room, and his smile would turn your day around if you were having a bad day. A real crime fighter, a true believer, a heart of gold.”

Moore is a decorated officer with four medals and over 150 arrests to his name.

His father and uncle are both on the force as well.

Given that this fallen officer had served honorably it’s no surprise Obama’s White House chose to ignore his funeral.