President Obama is at it again. Apparently hasn’t learned that his comments about ongoing FBI investigations, even though he says he’s not interfering, are actually interfering.

He didn’t learn from the Michael Brown case or the Trayvon Martin case that his comments and judgments about ongoing cases are usually and pathetically wrong.

On Fox News Sunday the President told anchor Chris Wallace that Mrs. Clinton was careless and showed “poor judgment” by using a private server to conduct State Department business and send and receive classified e-mails. He basically said the classified information she sent out wasn’t really that important and that she didn’t put our national security in jeopardy.

Then he declared her not guilty on national television.

“I continue to believe she has not jeopardized America’s national security,” Obama said. “There’s a carelessness in terms of managing emails that she has owned and she recognizes. But I also think it is important to keep this in perspective.”

Hmmm…. I wonder in what perspective General Petraeus was viewed. After all, he shared one file folder with another military member and lost his job and was put on probation. Hillary shared over 2000 e-mails, some with the highest security classification in the system, and Obama says she didn’t jeopardize national security? Really? Then why were they classified?

Mrs. Clinton doesn’t seem to be worried about it. In an interview with Matt Lauer the other day the Today Show host (correctly) suggested that people wanted her arrested. 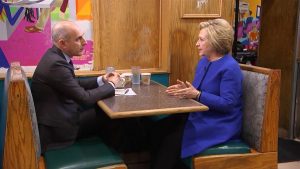 “They are clinging to the hope that the way they will be able to deal with that, is that at some point between now and the election… that they will get to see Hillary Clinton in handcuffs… that there will be some kind of political perp walk based on your private email server,” Lauer said.

“It’s a security review and there are lots of those that are conducted in our government all the time,” said Clinton. “And you don’t hear about most of them. You’ll only hear about this one because, you know, it does, uh, involve me. So, that’s why it gets so much attention.”

Apparently she does believe she is above the law and untouchable. And President Obama seems to indicate that he agrees.

I guess Hillary really has nothing to worry about considering how well Obama’s declarations of innocence (Brown and Martin) worked out for him. Oh, wait….