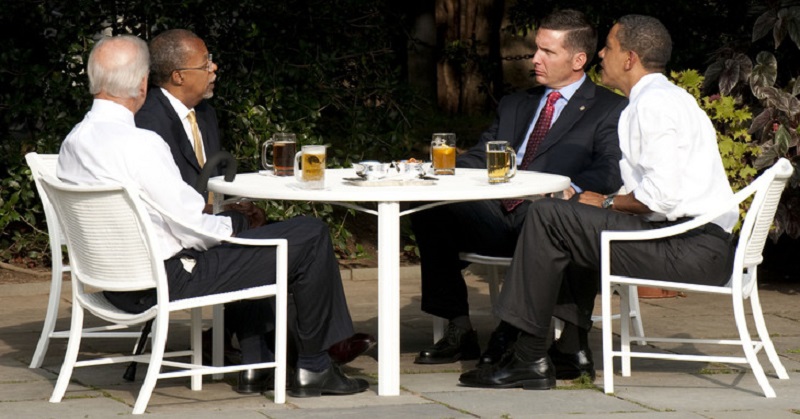 How did things get so bad so quick? During the Bush Administration, race relations improved dramatically.

In 2001, the year George W. Bush took office, 28 percent of Americans said they worried “a great deal” about the problems of race relations in the United States.

In 2010, the year after Barack Obama took office, that number was cut in half to 13 percent.

But it only took six years for Obama to destroy all the progress we have made.

Since 2010, when race relations were at a record low, they have shot up to a record high of 35 percent, a new Gallup survey reveals. 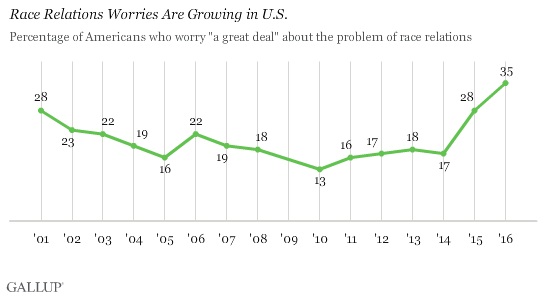 This destruction of the relative harmony we experienced is almost entirely the fault of President Obama’s bizarre and race-based policies, comments and criticisms.

From calling white police officers “stupid” for arresting a hostile black professor in 2009, Obama has made it crystal clear that his plans for a so-called “post-racial America” really means quite the opposite.

From declaring that the thug Trayvon Martin could have been his “son” – or him 35 years ago, to giving Attorney General the license to descend on local police departments with threats of civil rights penalties to the idiotic (and patently false) “Hands Up, Don’t Shoot” chant that the left has embraced to the “Black Lives Matter” racist mantra, the left and Obama have convinced Black America that the United States of America – perhaps the least racist country on earth – is awash in virulent racism that seeks out to murder them.

This election cycle, the Democrats are compounding on this by pandering to race-baiting black leaders, giving their complaints and their voice an amplification that is wholly inappropriate.

The Huffington Post, of course, has a different theory. Guess who they blame? Racist cops and … Donald Trump.

This uptick in concern coincides with high-profile fatal shootings of black Americans by police officers, which have led to public outrage and protests. The Black Lives Matter movement was founded in 2013 to draw attention to and work toward ending violence against black people, and it has especially gained momentum in the last two years.

Race has also been under the spotlight this election season, particularly as Republican front-runner Donald Trump has made a series of racist comments and policy proposals. Some white nationalist groups have also expressed their support for the candidate, and some minorities have reported suffering from racially motivated attacks at Trump rallies.

That’s nonsense, of course. If anything, Trump’s rhetoric is a reaction to the vitriol on the other side.