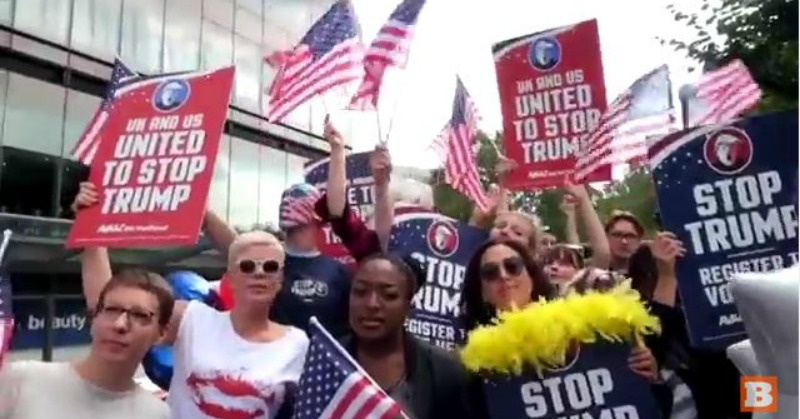 Another group backed by globalist billionaire George Soros is wreaking havoc and this time it involves potential voter fraud. A progressive left-wing group is seeking to register 8 million overseas voters via a biased, anti-Donald Trump voter drive despite being a “registered American charity.”

Breitbart reported that a Soros-backed group called “Avaaz” is working to register 8 million American voters that are living abroad:

“The initiative was launched in London in the United Kingdom on Wednesday by ‘Avaaz’, a registered U.S. charity and one the world’s largest and most powerful activist groups linked to globalist billionaire George Soros. Campaigners toured from the University College London down to Parliament blasting Bruce Springsteen’s ‘Born in the USA’ while chanting “Don’t Vote Trump” from an open top bus.

Avaaz launched in 2007 to agitate for various left-wing causes including animal rights and mass migration. They organised the biggest climate change march in the UK’s history and the Guardian has described them as ‘the globe’s largest and most powerful online activist network.'”

The 8 million Americans abroad almost never vote. This dead easy tool can fix that but only if we make it famous: https://t.co/z4l7lekdub

It is illegal for U.S. charities to work with or for a presidential candidate, and while Avaaz claimed that they were not doing so, during their rally you could clearly hear a woman yell “Vote for Hillary!”

According to Breitbart, 88 percent of American ex-pats did not register to vote in the last presidential election. Avaaz noted that this potential voting bloc is likely to be “progressive,” as “56 per cent of us [in the UK] have masters degrees,” and because in the last three presidential primaries, ex-pats overwhelmingly donated to Democrat candidates.

Avaaz called these voters a “massive untapped voting bloc,” but claimed that they aren’t affiliated with any particular candidate — despite their demonstrations against Trump.

The group put out a press release that cited an Oxford University Study which found that “America’s overseas voters… could decide the US presidency in 2016,” and that the huge, potential voting bloc of 8 million “would make up the 13th largest state.”

Meredith Alexander, the Campaigns Director for Avaaz, told Breitbart London that only 12 percent of Americans abroad were registered to vote in 2012, and “the reason they don’t vote is that it’s a complicated process for them to register from abroad and many Americans miss the deadline.”

This email template is posted on the site of the group that has worked unsuccessfully to defeat Brexit as well as in favor of other globalist policies such as the increased flow of refugees to the West: “8 million Americans abroad could defeat Trump… if they vote! I wanted to make sure you saw this new overseas registration tool that makes voting dead-easy. It literally takes a few minutes).”

Soros, one of the major financiers for Avaaz and other globalist groups, has committed $25 million to Democrat issues and Hillary Clinton in this election cycle alone, according to Politico.

Alexander said, “Avaaz is just as strongly in support of trying to stop Brexit as we are of trying to stop Trump” and that their opposition is “part of the same challenge” to stomp out anti-globalist, populist movements.