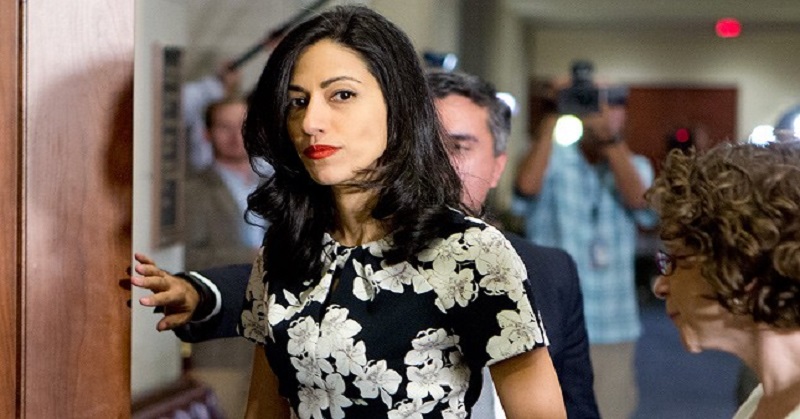 Huma Abedin has been Hillary’s closest confidante for two decades. She got her start when she was only 20 years old and an intern for Clinton when she was First Lady.

Since then she’s followed on her boss’s coattails all the way to the nomination.

She’s been involved inevery single one

, Huma’s been there. She was such an insider, Hillary gave her a cushy “second job” working at the Clinton Foundation.

She’s also a Muslim. That by itself isn’t a big deal. But her deep connections with the terrorist group The Muslim Brotherhood are – and with the exception of the mainstream media, they don’t go unnoticed.

Compounding this evidence comes word that for a decade, Huma worked at her mother’s radical Muslim journal, which espouses radical, anti-gay, anti-woman and pro-sharia beliefs. In fact, she was an editor at the journal.

The Journal of Muslim Minority Affairs claims itself to be a prestigious social science journal that focuses on Muslims in non-Muslim societies, but a look at their past articles tells a very different story, The New York Post is reporting.

Headlined “Women’s Rights are Islamic Rights,” a 1996 article argues that single moms, working moms and gay couples with children should not be recognized as families. It also states that more revealing dress ushered in by women’s liberation “directly translates into unwanted results of sexual promiscuity and irresponsibility and indirectly promote violence against women.” In other words, sexually liberated women are just asking to be raped

“A conjugal family established through a marriage contract between a man and a woman, and extended through procreation is the only definition of family a Muslim can accept,” the author, a Saudi official with the Muslim World League, asserted, while warning of “the dangers of alternative lifestyles.” (Abedin’s journal was founded and funded by the former head of the Muslim World League.)

“Pushing [mothers] out into the open labor market is a clear demonstration of a lack of respect of womanhood and motherhood,” it added.

In another 1996 article, Huma’s mother, Saleha Mahmood Abedin, wrote that Hillary and other politicians were advancing a “very aggressive and radical feminist” agenda that focused on empowering women, and was therefore “un-Islamic” and wrong.

“‘Empowerment’ of women does more harm than benefit the cause of women or their relations with men,” Saleha Mahmood Abedin maintained, while forcefully arguing in favor of Islamic laws that have been roundly criticized for oppressing women.

“By placing women in the ‘care and protection’ of men and by making women responsible for those under her charge,” she argued, “Islamic values generate a sense of compassion in human and family relations.”

“Among all systems of belief, Islam goes the farthest in restoring equality across gender,” she claimed. “Acknowledging the very central role women play in procreation, child-raising and homemaking, Islam places the economic responsibility of supporting the family primarily on the male members.”

“Among all systems of belief, Islam goes the farthest in restoring equality across gender,” she claimed. “Acknowledging the very central role women play in procreation, child-raising and homemaking, Islam places the economic responsibility of supporting the family primarily on the male members.”

She seemed to rationalize domestic abuse as a result of “the stress and frustrations that men encounter in their daily lives.” While denouncing such violence, she didn’t think it did much good to punish men for it.

That doesn’t sound very “empowering,” does it? Back in 2002, when Huma was still an editor, Huma’s mother justified the 9/11 attacks because the United States had imposed sanctions and other “injustices” on the Muslim world.

There are many more times in that journal that Huma’s mother and others have taken a rather backward, anti-woman, anti-American stance.

As editor of this journal, Huma Abedin has a lot to answer for.