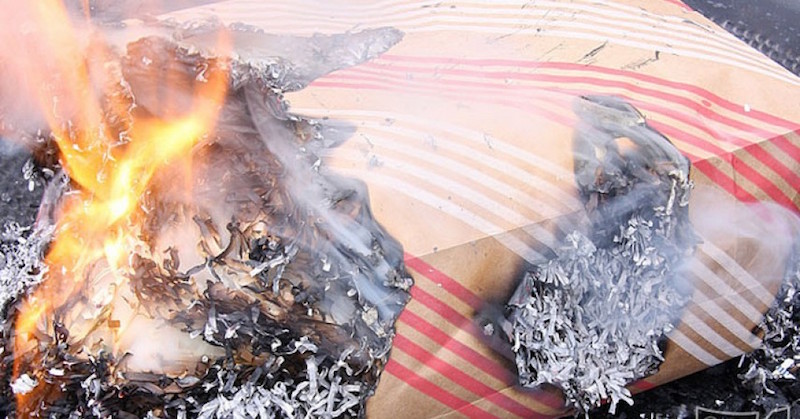 In a shocking admission of criminal wrongdoing, Huma Abedin admitted that Hillary Clinton routinely destroyed her official daily schedules as Secretary of State.

Those schedules are public record and destruction of them is against the law.

It was in a deposition last week that Clinton’s closest aide revealed that her boss put at least some of her schedules in a “burn bag” to be destroyed. There are numerous lawsuits – including the Associated Press – seeking those daily schedules.

“Burn bags” are containers that material is placed in before being destroyed.

“If there was a schedule that was created that was her Secretary of State daily schedule, and a copy of that was then put in the burn bag, that . . . that certainly happened on . . . on more than one occasion,” Abedin told lawyers representing Judicial Watch, the conservative organization behind the emails lawsuit, The New York Post is reporting.

The admission came in response to the question: “And during your tenure at the State Department, were you aware of the obligation not to delete federal records or destroy federal records?” She apparently wasn’t pressed for more details.

Clinton has already admitted to destroying “private, personal emails,” while secretary of state. But Abedin’s admission that they destroyed daily schedules is the first time there has been an admission of destruction of public records.

A former State Department official told The Post it was unprecedented for a diplomat to destroy a schedule like this.

“I spent eight years at the State Department and watched as four US ambassadors and two secretaries of state shared their daily schedules with a variety of State Department employees and US officials,” said Richard Grenell, former diplomat and US spokesman at the United Nations.

“I’ve never seen anyone put their schedule in the burn bag — because every one of them had a state.gov email address and therefore their daily schedules became public records, as required by law.”

“This shows, in my opinion, a skewed sense of security,” Brad Blakeman said. “The Clinton people would dispose of the secretary’s schedule in the same manner as if it were classified yet those same safeguards were not in place with regard to email communications.”

Either way, that’s yet another criminal charge that could be filed against Hillary Clinton: Destruction of federal records.

If they file any at all.