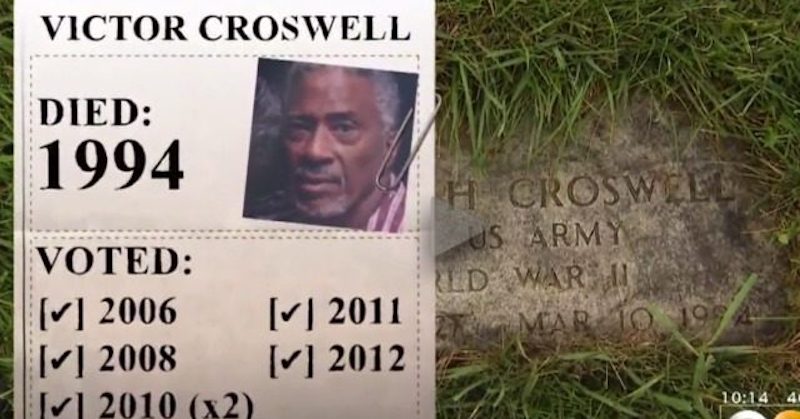 It’s getting harder and harder to deny that voter fraud exists when we keep finding it everywhere.

In Chicago, investigators have recently uncovered 119 dead residents who have voted a total of 229 times – after their burial.

Many Chicagoans are never officially removed from the voter rolls, so if someone casts a ballot for them they can continue to vote.

The station CBS2 Chicago reviewed voter rolls and compared them with Social Security death records and found more than 100 examples of dead city residents who have voted for years after they passed away. One man who passed away 26 years ago has voted 11 times since his death, and another man who died in 1994 has voted six times since he died.

“There are just a few instances here where a father came in for a son, or a neighbor was given the wrong ballot application and signed it,” said city election board spokesman Jim Allen, calling the dead voting “clerical errors.”

All of this comes after an undercover investigation by Project Veritas that showed Democratic operatives bragging on how they incite violence and hatred at Donald Trump rallies by committing voter fraud and manipulating the mentally ill.

In all, the analysis showed 119 dead people have voted a total of 229 times in Chicago in the last decade.

Jim Allen, a city election board spokesman, says a majority of those dead voters were most likely clerical errors, involving family members with the same names and addresses.

“This is not the bad old days,” Allen says. “There are just a few instances here where a father came in for a son, or a neighbor was given the wrong ballot application and signed it.”

While much of this is chalked up as merely a “clerical error,” there is no clear explanation in many of the cases.

Allen says about 60,000 dead voters have been purged from the rolls over the last decade — but 2 investigators found numerous examples of that not happening.

Earl Smith says he reported the 1997 death of his father, also named Earl Smith. But records indicate his father has voted twice after he died.

Allen says the board identifies and removes most dead voters.

“Any time you can clean up the rolls it helps reduce and eliminate the prospect of any kind of mistake or fraud,” Allen says.

Robert Sallee says he tried to do that by reporting his mother’s death multiple times.

“They’re just not taking her off the rolls,” he says.