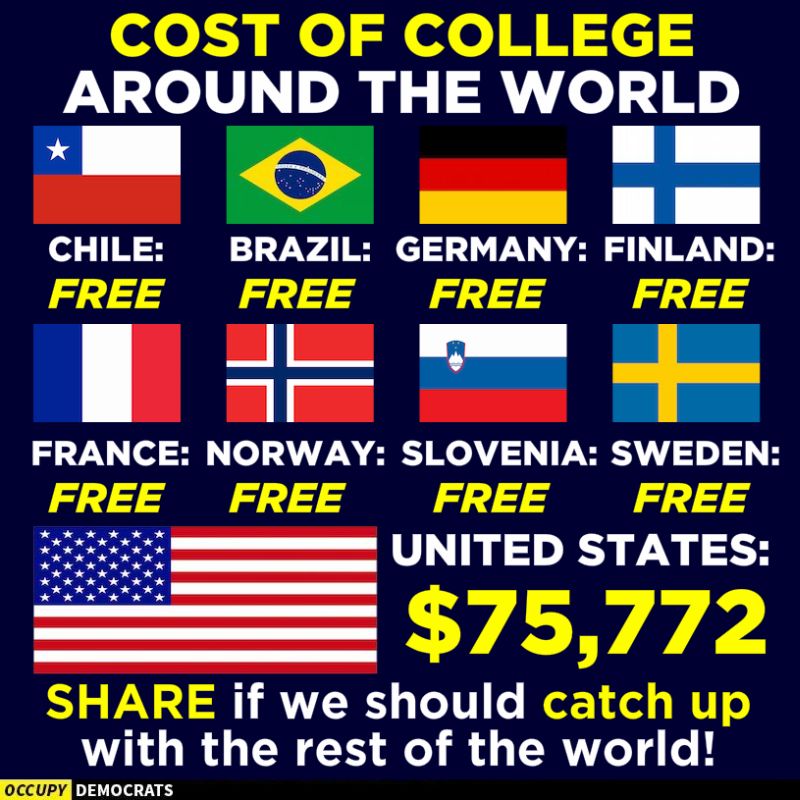 The above meme has been shared more than 200,000 times across Facebook.

Bernie Sanders is calling for free tuition for deserving students at four-year public universities in America, where the average total cost including room and board has skyrocketed to $75,772. This is tremendously unfair to our youth.

to support the claim that college isfree for deserving studentsin at least 8 countries around the world, including Chile, Brazil, Germany, Finland, France, Norway, Slovenia, and Sweden.

The problem is that the claim is false, or least highly deceptive, based on the criteria other countries have for determining who exactly is “deserving” of a “free” college education.

While Democratic national contenders are calling for debt-free college in the US, they offer few details about how they would finance such a plan.

Of course, many European countries like Germany already offer free college, though “free” is a relative term since tax payers absorb that cost.

But those European countries often differ greatly from the US in substantive ways. Their college enrollment percentages, for example, are much lower than in America.

Europe also traditionally has higher taxes than the US, which allows those countries to offer additional social services. …

European countries also differ substantively from the US in terms of the percentage of college attendees that their debt free models serve.

“Germany has a lower percentage of students go on to college than we have here in the US,” Mark Huelsman, a senior policy analyst at think tank Demos, told ATTN. …

For all countries, with the exception of Finland, the US has a much higher percentage of students who have enrolled in post-high school education. This will likely add a level of complexity to debt-free college plans in the US.

The bottom line is that, outside the United States, university education is “free” only for those who get selected, the so-called “deserving” ones.

But the criteria that separates the deserving from the undeserving is rationed by the state budget and other critical factors–to help bolster special state-selected industries, for example.

The result is that college is “free” for only about 12-15%, and those numbers are usually reserved for the offspring of the political elites and the professional classes.

The majority of America’s college-educated adults today could never have qualified to attend in the first place under such stringent rules.

Freedom, opportunity, and economic sustainability will suffer if university education suddenly becomes “free” in the United States on the European model.