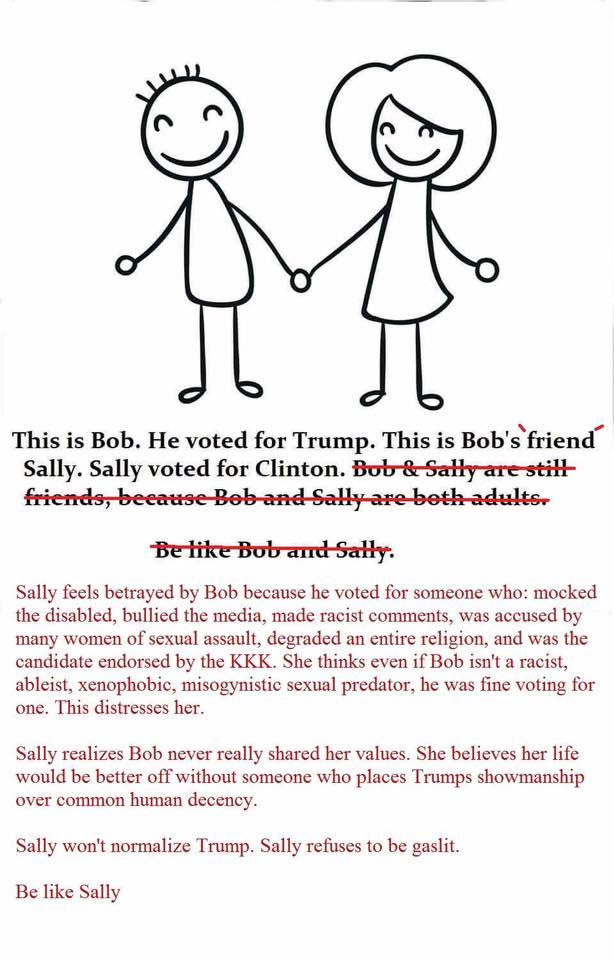 After Trump’s victory in November’s election, many “not my president” Democrats felt that President-elect Donald Trump is despicable enough that anyone close to them who voted for Trump had betrayed their friendship by supporting a so-called bigot.

These are the same Democrats who think that Trump wanting to enforce our country’s immigration laws means he hates Mexicans.

People who believe fake news think he’s an ableist who mocks the disabled. Of course, the claim that Trump mocked reporter Serge Kovaleski because he’s disabled has been hugely discredited.

Occupy Democrats shared a cartoon meme on Facebook which means to guilt liberals into ending their friendship with anyone who voted for Trump over Clinton because of his supposed lack of “human decency.”

According to leftists, if a liberal has a friend who voted for Trump, then that friend is a KKK supporting misogynist who can’t be trusted. Americans coming together no matter who they voted for normalizes Trump as the president.

In other words, not only do they refuse to accept Trump as their president but also as anyone’s president.

It must have annoyed Occupy Democrats when they found out that not all Trump critics hate Trump Supporters. That made them angry enough to insist that they should.

The theme here is thought policing. If you voted for Trump, liberals “know” you’re racist. If friends voted for Trump, they “know” they’re not true friends. Furthermore, it bothers them when even other liberals don’t agree enough to guilt people into ending relationships with people who care about them.

No, America, don’t be like Sally. Do not be petty enough to assume that just because someone voted for someone you didn’t that that person is your moral inferior who was never really your friend. Yes, Trump supporters can and do oppose racism.

Micro-managing the political leanings of your friends is not a value you should have.