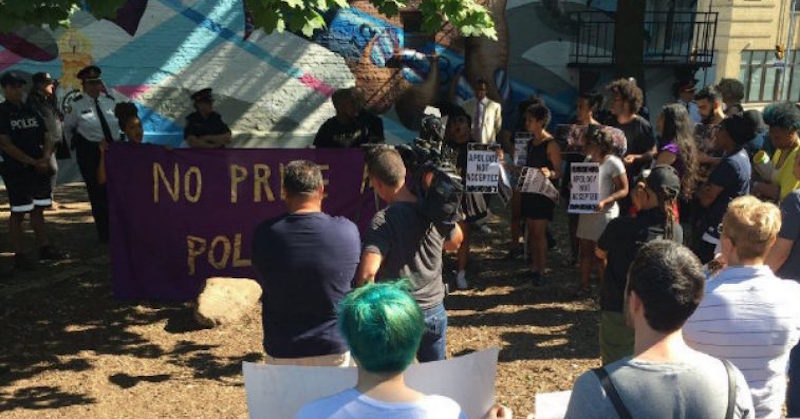 Unable to stay out of the spotlight for more than about four minutes, Black Lives Matter crashed a LGBT news conference in Toronto.

The local police were unveiling a mural dedicated to the city’s gay and lesbian community.

The conference was accompanied by a public apology from Toronto Police Chief Mark Saunders for the “bathhouse raids” in the city in 1981 that resulted in the arrest of 286 men charged with prostitution and indecency.

It was then when Black Lives Matter protesters butted in, chanting “No Pride in Police!” Fox News is reporting.

Constable David Hopkinson, a police spokesperson, disagreed, saying, “I believe the chief was heartfelt in his apology for the bathhouse raids. He was sincere in his words.”

The Toronto Black Lives Matter has demanded a face-to-face meeting with Saunders and insisted on an overhaul of the “Special Investigations Unit,” a civilian agency that investigates crimes committed by officers.

They’ll have to wait a little longer, as I doubt that Chief Saunders will feel like meeting with them after this stupid stunt.

What’s wrong with these people? Can’t they let other people speak at all? Must they hog the spotlight at all times? How embarrassing.