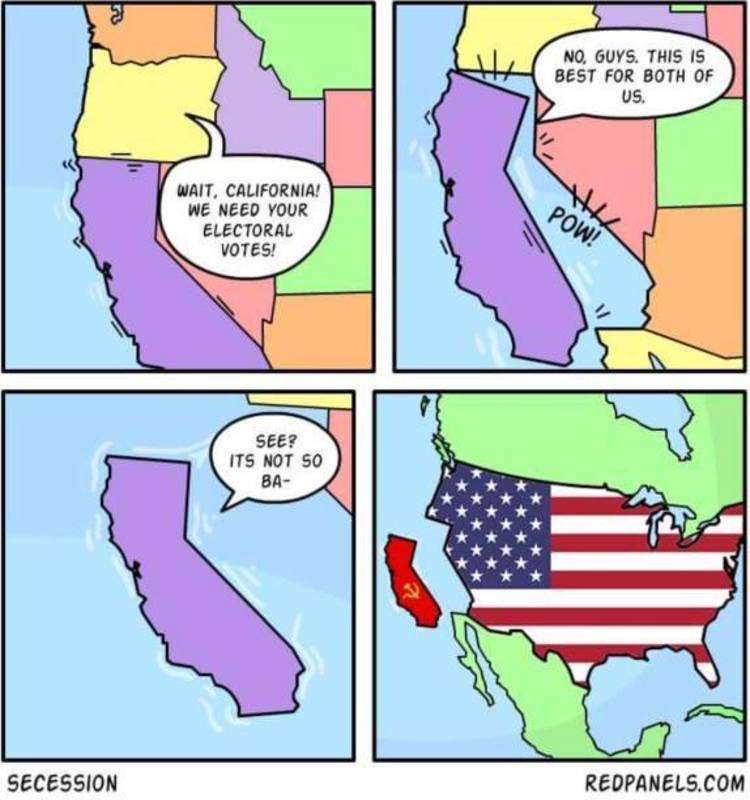 Robert Gehl reports Hillary Clinton’s lead in the popular vote has now exceeded Donald Trump’s by more than 2 million, but that’s not the whole story.

That lead – 2 million – is less than the lead Clinton had over Trump in California alone.

In that state, Hillary got 7.8 million votes compared to Trump’s 4.1 million.

So without California, Trump would have handily won.

We all know how the Electoral college works, so there’s no need to go over it again (here’s a good article that might help).

But just in case anyone suggests that Trump or Republicans don’t have a legitimate claim to power, remind them of the following:

Donald Trump won five states that voted for Barack Obama in 2008 and 2012: Iowa, Wisconsin, Ohio, Pennsylvania and Florida. Ohio and Iowa were part of the Democrats’ “firewall” that would have certainly guaranteed the presidency for Hillary, The Daily Caller is reporting.

But it’s not just the presidency. Democrats suffered humiliating defeats across the country.

Under Barack Obama’s presidency, Democrats have lost almost 1,000 state legislative seats. There are now more GOP state legislators than at any time in almost 100 years. If Pat McCrory holds onto the governorship in North Carolina, Republicans will also match a century-old record of governorships, at 34.

Republicans, on the other hand, have complete control of state government in 25 states – half of the country. The Washington Post reports:

One Democrat who understands the need to for his party to reconnect with working-class voters in middle America is Rep. Tim Ryan (D-Ohio), who has challenged Rep. Nancy Pelosi (D-Calif.) for the post of House minority leader. “What we are doing right now is not working,” he wrote in a letter to his colleagues. “Under our current leadership, Democrats have been reduced to our smallest congressional minority since 1929. . . . We have the fewest Democrats in state and federal offices since Reconstruction.”

If Democrats are smart, they will listen to Ryan. His district includes hurting industrial areas such as Youngstown and Akron — so he understands how to win the very voters Democrats lost in 2016 and need to win back. Do they have a better chance of winning back those voters by electing him or an aging, coastal San Francisco liberal such as Pelosi? Ryan is young and dynamic — just 43 years old. The House Democratic leadership, by contrast, is old. The Post recently reported that the average age of the House Democratic leadership is almost 65 years old. And Pelosi is 76 — a year older than Bernie Sanders. Perhaps Democrats should take the advice of John F. Kennedy and pass the torch to a new generation.