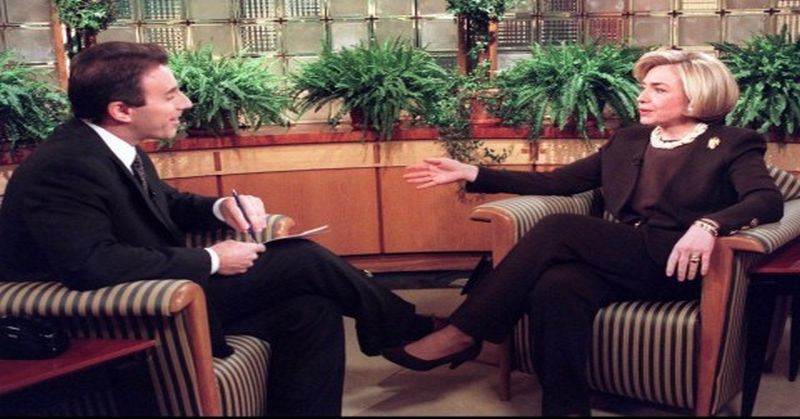 The Today Show with Matt Lauer interviewed Hillary Clinton in January, 1998, asking her about accusations that her husband was lying when he said he didn’t have sexual relations with White House intern, Monica Lewinsky.

Bill had already been in trouble for his affair with Gennifer Flowers.  He’d just gone on national television, announcing he did not have sexual relations with Ms. Lewinsky.

Lauer then asked Hillary this question: Should the American people call for her husband’s resignation, if it turns out he lied about having an affair?

Of course, Hillary dodged the question, saying “They should certainly be concerned about it.”

When asked the same question again, she continued to refuse an answer, saying “That would be a very serious offense,” this time quickly elaborating, “But that is not going to be proven true.  I think we’re going to find some other things.”

What other things exactly?

Why, “the vast right wing conspiracy” she made up earlier in the interview!

“This is—the great story here for anybody willing to find it and write about it and explain it is this vast right-wing conspiracy that has been conspiring against my husband since the day he announced for president. A few journalists have kind of caught on to it and explained it. But it has not yet been fully revealed to the American public. And actually, you know, in a bizarre sort of way, this may do it.”

Now, hoping that by continuing to speak, maybe Lauer would forget that he’d just asked her a question and that Hillary had refused to answer it.

“I think we’re going to find some other things.” Clinton said.  “And I think that when all of this is put into context, and we really look at the people involved here, look at their motivations and look at their backgrounds, look at their past behavior, some folks are going to have a lot to answer for.”

Obviously, Clinton didn’t avoid answering Lauer’s question for no reason.  And she’d said “that isn’t going to be proven true” instead of “that isn’t true” because she wanted to cover her own behind if the going got tough.

Today, before the 2016 presidential election, Lauer’s question needs to be asked again, rephrased.

“Secretary Clinton, if a First Lady lied on national television, and she accused people who were after the truth of conspiracy, should she be president?”

“If a Secretary of State lied to the American people about a terrorist attack in Benghazi in order to protect her self-interests, should she be president?”

“If a Secretary of State lied to the American people about her use of a private email server to handle confidential information, should she be president?”

“And if these are just some of the public lies you’ve been caught making before you were president, if you become president, how many lies do you think ought to be forgiven before Americans expect you to resign?”

Or is all of this just “something they should be concerned about?”  Maybe just “a very serious offense?” Or perhaps another “vast, right-wing conspiracy?”