As AEIdeas points out, the New York Times had all the wrong things to say about the solar energy industry in an April article headlined “Today’s Energy Jobs are in Solar, not Coal.”

The New York Times tried to lift up the solar energy industry as an example of progress and modernity.

They would have been better off staying quiet about how many solar energy workers there are, considered how little electricity all those workers produce.

What’s wrong with solar energy? This AEIdeas graph says it all: 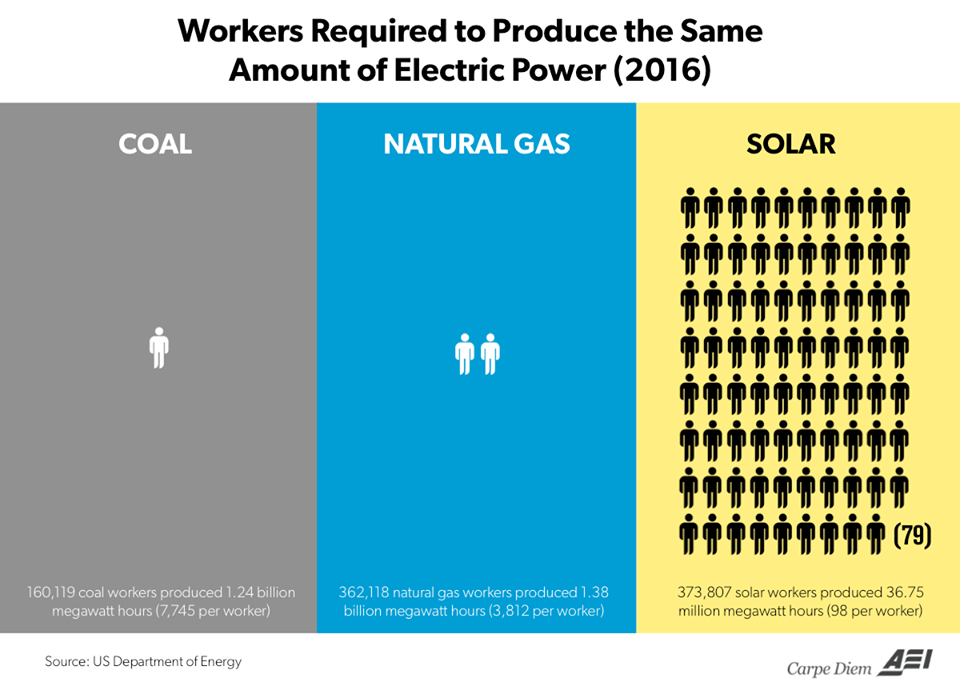 Solar energy’s output of electricity is pathetic in comparison to coal, in spite of a massive workforce.

To start, despite a huge workforce of almost 400,000 solar workers (about 20 percent of electric power payrolls in 2016), that sector produced an insignificant share, less than 1 percent, of the electric power generated in the United States last year (EIA data here). And that’s a lot of solar workers: about the same as the combined number of employees working at Exxon Mobil, Chevron, Apple, Johnson & Johnson, Microsoft, Pfizer, Ford Motor Company and Procter & Gamble.

In contrast, it took about the same number of natural gas workers (398,235) last year to produce more than one-third of U.S. electric power, or 37 times more electricity than solar’s minuscule share of 0.90 percent.

What does this mean for renewable energy jobs? Thinking that a massive amount of workers in solar energy is a good thing is sort of like deciding that it would be nice if books were copied by hand to increase the number of employees in publishing.

The fact that solar energy requires so many new workers is an embarrassment, since they still can’t produce a significant amount of electricity.

The goal of America’s energy sector isn’t to create as many jobs as possible (as the NYT article would apparently have us believe) especially the politically-favored and heavily-subsidized renewable energy jobs. Rather, the economic goal is to produce as much electric power as possible at the lowest possible cost, and that means we want the fewest number of energy workers!

That’s tough luck for “today’s energy jobs.” Working hard for next to nothing seems to be the fate of solar energy.