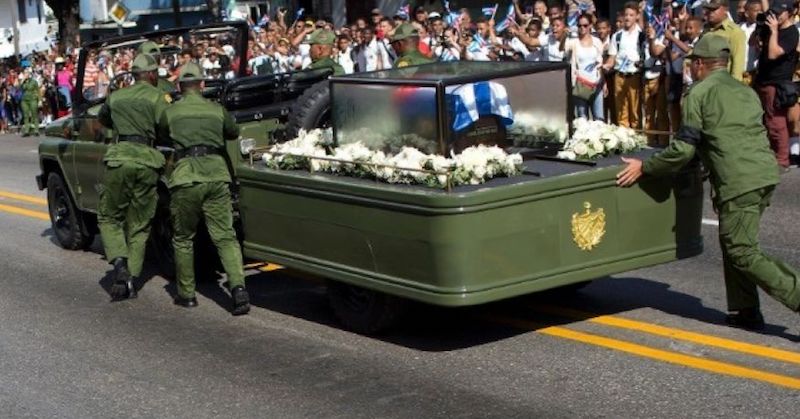 In one final dose of Karma, the jeep pulling Fidel Castro’s ashes through the final funeral procession broke down and needed to be pushed by soldiers.

The breakdown came in the midst of throngs of “adoring fans” chanting “Long Live Fidel!” in state-mandated displays of emotion.

The breakdown of the Russian-made jeep was ironically symbolic of the barbaric decades of Castro’s rule on the island nation.

They lined up by the thousands, acting somber if told to or raucous if needed, Cubans pretended to be saddened by the death of one the Western Hemisphere’s most brutal dictators.

With the exception of the faux-praise from Cubans, only leftist world leaders like Barack Obama, Jimmy Carter, Vladimir Putin and groups like Black Lives Matter praised the hellbound dead man.

“Fidel ascends to the realm of the ancestors, we summon his guidance, strength, and power as we recommit ourselves to the struggle for universal freedom. Fidel Vive!” Black Lives Matter wrote on an official page.

The Cuban military fired a 21-gun salute and crowds at the entrance to the cemetery sang the national anthem as the ashes entered about 40 minutes later. The ceremony lasted more than an hour and took place out of the public eye after Cuban officials made a last-minute cancellation of plans to broadcast the events live on national and international television. International media were also barred from the ceremony, Fox News reports.

Castro was responsible for the deaths of tens of thousands of people and the exile and displacement of millions. His brutal dictatorship was marked by constant antagonism toward everything America represented: Freedom, democracy, liberty and justice.

The breakdown won’t deter the man’s march straight to hell for too long.