Why is North Korea in its current position of nuclear power and aggression? Because of two former U.S. presidents. 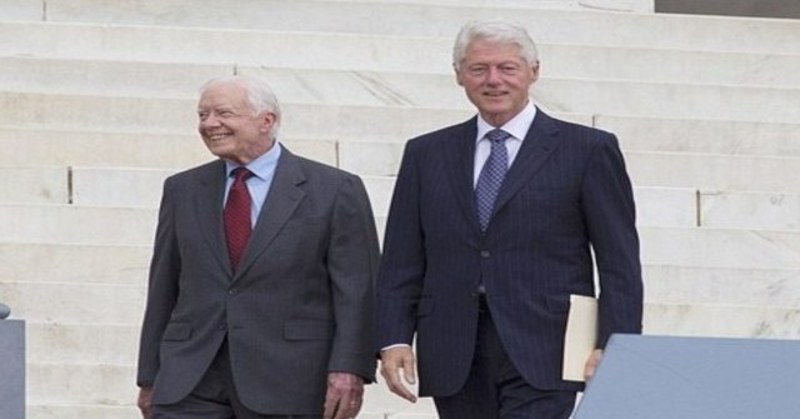 Jimmy Carter & Bill Clinton. They are to blame for North Korea.

Why? What did these guys do? Well, it’s not necessarily what they did but, instead, what they believed. In other words? They were incredibly gullible.

Back in 1994, President Clinton prepared to confront North Korea over CIA reports it had built nuclear warheads and its subsequent threats to engulf Japan and South Korea in “a sea of fire.”

Enter self-appointed peacemaker Carter: The ex-prez scurried off to Pyongyang and negotiated a sellout deal that gave North Korea two new reactors and $5 billion in aid in return for a promise to quit seeking nukes.

Clinton embraced this appeasement as achieving “an end to the threat of nuclear proliferation on the Korean Peninsula” — with compliance verified by international inspectors. Carter wound up winning the Nobel Peace Prize for his dubious efforts.

Nice job, Carter. You sold them weapons and you got a promise. A promise from a militaristic totalitarian regime.

Well, when you put it that way, it sounds pretty bad.

And why is that? Because you know North Koreans will not keep their promise.

By 2002, North Koreans “fessed up.” They’d begun violating the accord on Day One. Four years later, Pyongyang detonated its first nuke.

Don’t get me wrong, Carter is a nice guy. But nice guys shouldn’t negotiate deals and nuclear compromises with North Korea. Nor should they go bowling with members of Al Qaeda.

They should stick to building houses for Habitat for Humanity. That is what nice people do.

What was Obama’s position on North Korea? Obama’s administration said it would “never ‘accept a nuclear North Korea.” Instead, Obama cut deals with Iran and “the ayatollahs go atomic.”

So before we start to get all worked up about how President Trump should or should not be handling North Korea, it is very important to remember how we got into this situation to begin with.

It may instruct our steps for the future.