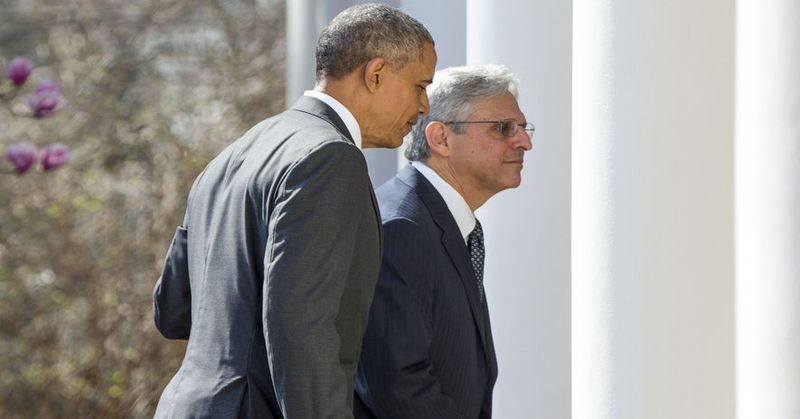 In the last days of the Obama administration, some liberal legal scholars have argued the president should recess appoint Judge Merrick Garland to the Supreme Court to punish Senate Republicans.

The Daily Caller explains that the Constitution’s recess appointment power allows the president to make appointments to federal offices without congressional consent while Congress is in recess; however the appointment is only temporary, and expires at the conclusion of the ensuing Senate session.

Although, Obama could still potentially force Judge Merrick Garland onto the U.S. Supreme Court on Tuesday if he truly wanted to. Here’s how it works: When Congress returns to Washington on January 3rd, the current congressional term will be gaveled out by the speaker of the house. Approximately one minute will elapse before he gavels in the 115th Congress.

In those few moments the Senate will go into what’s known as an “intersession recess,” creating one golden moment when the president could test his recess-appointment powers by appointing Judge Garland to the Supreme court.

However, it’s a legal gamble and one that has so many pitfalls that even those who say he could get away with it believe it isn’t worth the fight, and Obama has given no indication that he’s thinking about it.

The move would be a legal gamble under the high court’s last ruling in 2014 on recess appointments. That 9-0 decision overturned a handful of Mr. Obama’s early 2012 picks, saying the Senate was actually in session when the president acted, so he couldn’t use his powers.

That ruling also said, however, that there’s a difference between appointments made during the annual yearlong session of Congress, dubbed “intrasession,” which Mr. Obama used in 2012, and picks made at the end of the year, after Congress adjourns, which are known as “intersession.”

William G. Ross, a law professor at Samford University in Birmingham, Alabama, said Mr. Obama would have the power to elevate Judge Garland. But he said it would be “politically unwise and damaging to the prestige of the court.”

“It would exacerbate acute political tensions that have roiled the transition process and promise turbulence from the very start of the Trump administration, and it would contribute to the growing public perception that the court is unduly political,” Mr. Ross said.

Since Obama did fail miserably in the 2014 case (by a stinging 9-0), he may not want to go down that road again and further embarrass himself.

On top of that, Judge Garland would lose his seat on the U.S. Court of Appeals for the D.C. Circuit — oftentimes dubbed the second-most powerful court in the country. That would mean Garland could only serve one year as Supreme Court Justice, which Ross, the law professor, presumed that he would “accomplish little and his service would be clouded by the strange and controversial circumstances of his appointment.”

He said Obama might instead try to fill some of the five dozen other empty federal court judgeships that are vacant. Even though they too would only be limited to a year’s tenure as recess appointments, Ross claims it’s possible the Senate might vote to confirm at least some of them to lifetime tenure.

We’ll soon find out what Obama decides to do.