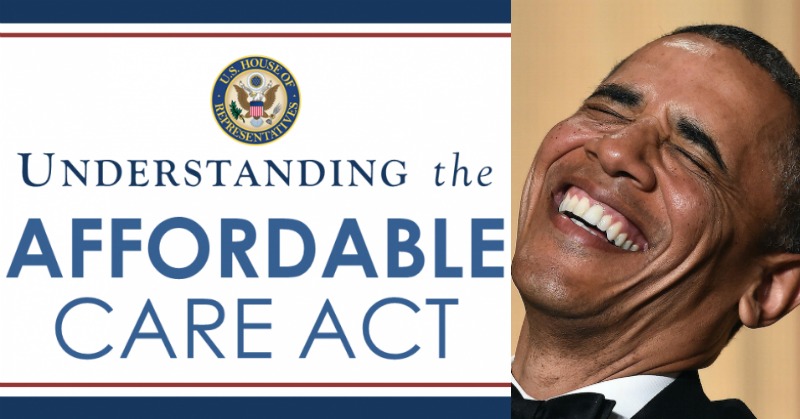 Obamacare has been a massive failure, as conservatives said it would be, and now it has been reported that the White House broke the law to prop up the unsustainable program.

The Obama administration failed to abide by the rules set in place in their own healthcare law that required that a certain amount of funds be directed to taxpayers via the Treasury.

Instead of directing the correct proportion of funds to the Treasury, they were diverted to insurers in an effort to prop up the failing system and reimburse insurers that have lost money.

“The Affordable Care Act established a three-year “reinsurance” program to collect funds from participating insurers and then pay a portion to plans that took on costlier enrollees. Yet it was supposed to allocate some of its collections to the Treasury, too.

The administration projected it would take in $10 billion for reinsurance purposes and $2 billion for the Treasury in 2014, the program’s first year.

When collections fell short of estimates, the Health and Human Services Department prioritized payments to insurers over the Treasury, angering Republicans who said the agency put its contentious program over taxpayers, who got nothing.”

On Thursday, the Government Accountability Office wrote a legal opinion siding with lawmakers who called the Obama administration out for its illegal apportioning of funds.

The GAO wrote in their opinion: “The fact that HHS’s collections ultimately fell short of the projected amounts does not alter the meaning of the statute.”

Seven House and Senate committee chairmen touted the GAO’s opinion as a victory in the quest to hold the Obama administration accountable for putting Barack Obama’s “legacy” and the wallets of insurers ahead of taxpayers:

“This new opinion from the government’s top watchdog confirms that the Obama Administration is not above the law. The administration needs to put an end to the Great Obamacare Heist immediately.”

Although Obama surely wants to secure his legacy, which is firmly rooted in Obamacare, its real success or failure doesn’t lie in the program itself.

Obamacare was never meant to do anything more than provide a stepping-stone toward single-payer, government-run healthcare. Its failure was calculated — it had to fail and fail in such a way that people would clamor for the government to do something — i.e. nationalize healthcare completely. The individual mandate was a big step in this process.

This is precisely why Obama is imploring voters to cast their ballots for Hillary Clinton. Although Democrats tend to stick together, the two could hardly be called friends, with their contentious battle for the presidency in 2008 likely enough to sever even that tie. Instead, Obama knows that his legacy rests squarely on the shoulders of this election.

If Clinton is elected, she has the opportunity to likely usher in single-payer healthcare, or at the very least move close to it. If GOP nominee Donald Trump is elected, Obama’s legacy will likely go down in flames, right where it belongs.