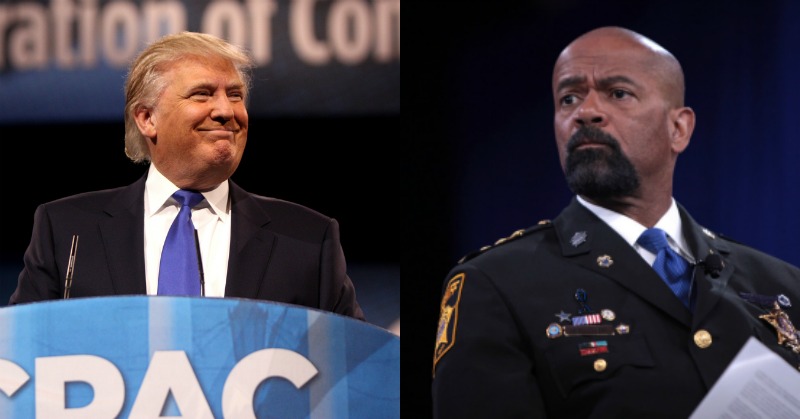 The meeting is right in the thick of Trump’s deliberations over who will fill very important positions in his upcoming administration. While officials did not confirm whether or not a position would be offered to Clarke, Republican National Committee Communications Director and Chief Strategist Sean Spicer spoke about the many meetings Trump has taken and will continue to take:

“The president-elect meets with individuals who he believes he wants to hear their ideas, suggestions and opinions and then sometimes considers them for multiple potential positions.”

Clarke, an outspoken champion for Second Amendment gun rights and a registered Democrat, has earned the respect from Trump supporters during the campaign. He also spoke at the Republican National Convention in Cleveland, supporting Trump for president.

Clarke also criticized Black Lives Matter activists, calling them a “a bunch of thugs, a bunch of creeps, criminals, [and] race-hustlers.”

“I think very fair in light of the anti-cop rhetoric that is sweeping the United States of America, fueled by this group, some of the vulgar, vile, vicious rhetoric coming out talking about killing cops,” Clarke said during an appearance on CNN.

Clarke has discussed the potential of a role in the Trump administration, in his signature, no-nonsense fashion:

I don’t expect anything, I don’t have an entitlement mentality. I told Donald Trump I wanted to help him, because I thought that this country needed his leadership. That being said, if the president asks you to serve, you step up to fulfill that duty. So if he feels that I can help him and he calls on me, sure I’ll accept it, but I’m not expecting anything.

Clarke’s common-sense, no-nonsense commentary has been lauded by conservatives as he has taken on the left and their disturbing anti-law enforcement rhetoric.

Trump’s promise to restore law and order seems to be right in line with Clarke, who would be an excellent person to work with toward that goal.

Many conservatives will undoubtedly be excited about a potential Clarke appointment somewhere in Trump’s administration and if they both feel there is a good fit then hopefully that comes to fruition.