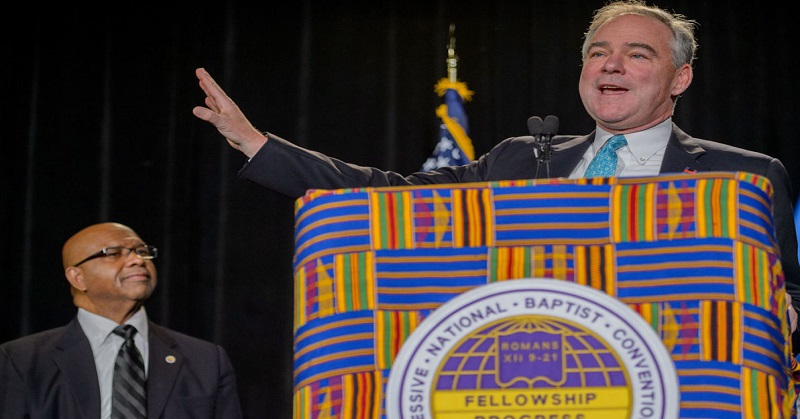 In a manipulative effort to deceive the American public about the true dangers of illegal immigration and flouting law and order, Democrats are constantly intent on framing the GOP as racist demagogues.

The left tries to convince us that Republicans are waging a war on women, a war on black people, a war on illegal immigrants. But it is the Democrats who aggressively pander and use toxic identity politics to rally support. In order to perpetuate class warfare and the narrative of an unjust America, they have made white males the scapegoat.

The white man and traditionalism, leftists claim, are responsible for America’s problems.

While speaking to a group of black Baptists in New Orleans, Tim Kaine seemed to suggest that in order to achieve “equity” between the races, white people need to willingly submit themselves to a state of repression similar to what black Americans have experienced.

“I’ve never been treated badly in life because of my skin color or my gender. If I’ve been treated bad in life it’s because the other person was a jerk or I deserved it,” said Kaine,  drawing enthusiastic cheers from the crowd. “I think the burden is on those of us who are in the majority–Caucasians. We have to put ourselves in a place where we are the minority.”

Moreover, this destruction of the middle American economy is having very real, very negative effects on white Americans. “Something startling is happening to middle-aged white Americans,” The New York Times reported in 2015. “Unlike every other age group, unlike every other racial and ethnic group, unlike their counterparts in other rich countries, death rates in this group have been rising, not falling.”

Multiple Latino advocacy organizations have the word “raza” — race — in their title, while black activists routinely talk about protecting the “black community” and frequently engage in outright discrimination against white people. Meanwhile, white children in some of the nation’s most elite schools are literally being taught to be ashamed of themselves because of the color of their skin.

“Hillary and I both kind of challenge our Caucasian leaders and Caucasian communities to do that. She’s made it clear that taking on these inequities is one of the most important tasks of being our next president,” Kaine said.

(listen to Kaine’s remarks about white privilege at the 20 minute mark in the video above.)

In order to transcend racial divisions, we must solve the problems of poverty, economic opportunity and access to quality education.

Deflecting criticism of their failing policies by race baiting perpetuates poverty, poor educational opportunities, and substandard economic opportunities for those who are poor – regardless of race.

Democrats have successfully bantered the term “white privilege” in academia, the press, and in select governmental agencies. Now it is becoming embedded in the public consciousness.