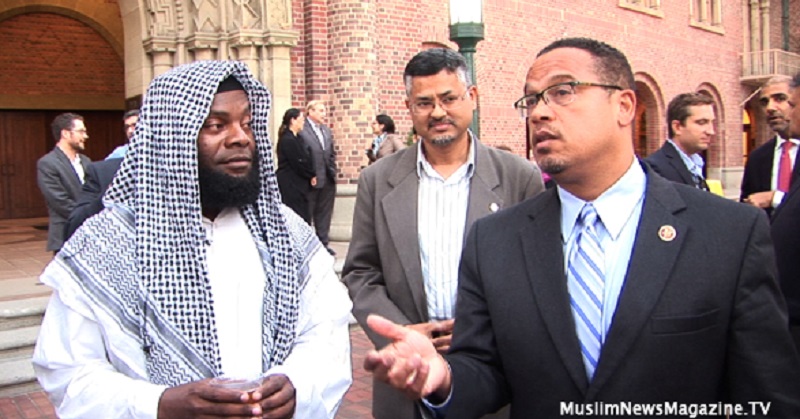 Keith Ellison wants to be the new chairman of the Democratic National Committee.

If he makes it, he’d be the first Muslim to lead a major political party. But that’s no big deal. This is:

The Minnesota congressman has written about his support for a separate nation for black people. He has actively worked with and for the Nation of Islam, which openly and actively promotes a “blacks only” nation.

As a third-year law student at the University of Minnesota, he wrote two columns under the name “Keith Hakim,” The Weekly Standard reports.

In the first, Ellison refers to “Minister Louis Farrakhan,” defends Nation of Islam spokesman Khalid Abdul Muhammad, and speaks in the voice of a Nation of Islam advocate.

In the second, “Hakim” demands reparations for slavery and throws in a demand for an optional separate homeland for American blacks.

In February 1990, Ellison participated in sponsoring Kwame Ture (Stokely Carmichael) to speak at the law school on the subject “Zionism: Imperialism, White Supremacy or Both?” Jewish law students met personally with Ellison and appealed to him not to sponsor the speech at the law school; he rejected their appeal, and, as anticipated, Ture gave a notoriously anti-Semitic speech.

In 1995, he worked on behalf of the Nation of Islam. At the Million Man March rally, he stood onstage next to the racist Khalid Abdul Muhammad while he said “If words were swords, the chests of Jews, gays and whites would be pierced.”

Then in 1997, Ellison was a spokesman for the Nation of Islam using the last name “Muhammad.”

He spoke at a public hearing in connection with a controversy involving Joanne Jackson of the Minnesota Initiative Against Racism (MIAR). Jackson was alleged to have said, “Jews are among the most racist white people I know.” Jackson denied making the statement or insisted that it had been taken out of context. Ellison appeared before the MIAR on behalf of the Nation of Islam in defense of Jackson’s alleged statement. According to the Star Tribune and the full text of the statement published in the Minneapolis Spokesman-Recorder, Ellison said:

We stand by the truth contained in the remarks attributed to [Ms. Jackson], and by her right to express her views without sanction. Here is why we support Ms. Jackson: She is correct about Minister Farrakhan. He is not a racist. He is also not an anti-Semite. Minister Farrakhan is a tireless public servant of Black people, who constantly teaches self-reliance and self-examination to the Black community. . . . Also, it is absolutely true that merchants in Black areas generally treat Black customers badly.

Ellison has since distanced himself from the NOI, saying “it became clear to me that their message of empowerment intertwined with more negative messages.”

But it seems much of the “negative messages” were either his own or tacitly endorsed by Ellison.

He calls himself a “friend of Israel” and of the Jewish people.

But history doesn’t show that. Not one bit.