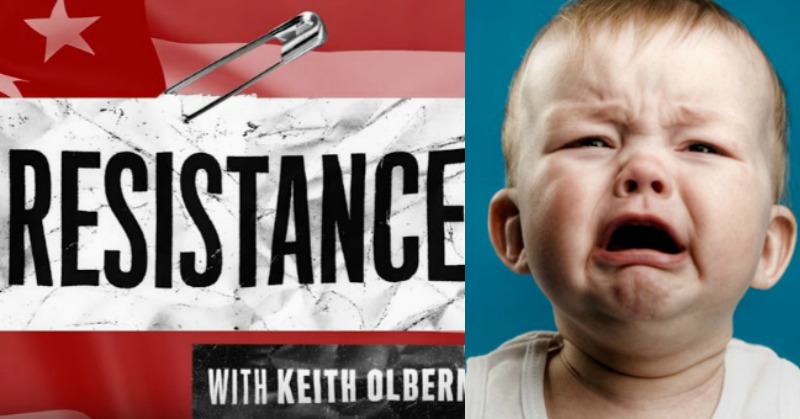 Former MSNBC host Keith Olbermann proposed one of the most childish, absurd, and pathetic ways to “resist” President-elect Donald Trump — he urged anti-Trumpers not to refer to him as “president,” even though that is what he will be after Jan. 20 whether they like it or not.

In a web video produced by GQ Magazine Keith Olbermann lamented that the Electoral College affirmed the result of the election, that Donald Trump will be the 45th President of the United States. However, he said the “resistance” can still combat Trump — by not calling him ‘President Trump.’ Olbermann also suggested reminding Trump supporters everyday that Trump lost the popular vote.

“Resistance means find a Trump supporter every day and remind them he lost the popular vote,” Olbermann whined.

And then Trump supporters should remind them that Clinton’s vote count surely included illegal immigrants, dead people, and a host of other illegitimate votes … followed by a swift reminder that Trump ran a superior campaign, won the Electoral College, and is the president and that it’s time to grow up and get over it like conservatives did eight years prior … and four years prior.

“There is also a passive-aggressive, subtler way to make this point clear,” Olbermann explained. “It is like most of the points that finally defeated the Republicans of the Bush era. Those points succeeded not by suddenly knocking down walls, but instead by eroding them as would a river.”

He continued, “not using one word can be just as forceful as perpetually using another. Never address Trump as President. He is Trump. Just Trump. Never president. The title of President, that we must protect for a happier and more honest time. Resistance means refusal. Resist! Peace.”

Olbermann whined about one alarmist liberal talking point after another in the bizarre video. He had a full-on meltdown and acted as if the election of Trump was practically the end of the world, yet his smug, self-satisfied idea in response was to just not call Trump president …

Seriously, that’s the level of discourse and critical thinking we’re dealing with here.

Olbermann threw down the gauntlet — he took his Play-Doh, coloring books, and safety pins to his safe space and isn’t going to play with the rest of us!

Oh noes! Whatever will we do?

I love that Olbermann also used how conservatives pointed out facts against Clinton such as Benghazi and her email scandal as a template for his petulant, time-wasting scheme to just not call Trump president.

That underscores the real difference between the left and the right these days. The right brings up facts to back up their stances whereas the left refuses to acknowledge reality and can’t back up their irrational anger without using lies, nonsense, and baseless insults.

Sorry Olberman, no amount of special snowflake meltdown is going to change the fact that Trump will be the 45th President of the United States on Jan. 20, 2017.

Better start buying stock in Play-Doh and coloring books to deal with something the left truly hates — the fact that Trump may well spend the next 4-8 years actually making America great again.