Here is the truth about labor unions that they no longer teach in public schools: 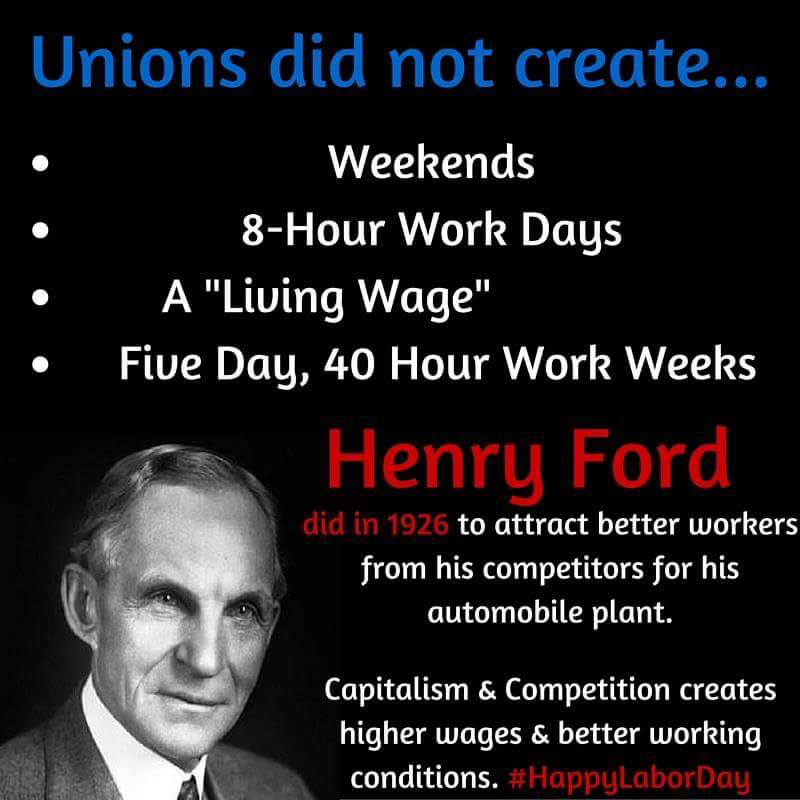 In early 1926, Ford Motor Company becomes one of the first companies in America to adopt a five-day, 40-hour week for workers in its automotive factories.

The policy would be extended to Ford’s office workers the following August.

Henry Ford’s Detroit-based automobile company had broken ground in its labor policies before.

In early 1914, against a backdrop of widespread unemployment and increasing labor unrest, Ford announced that it would pay its male factory workers a minimum wage of $5 per eight-hour day, upped from a previous rate of $2.34 for nine hours (the policy was adopted for female workers in 1916).

The news shocked many in the industry–at the time, $5 per day was nearly double what the average auto worker made–but turned out to be a stroke of brilliance, immediately boosting productivity along the assembly line and building a sense of company loyalty and pride among Ford’s workers.

The decision to reduce the workweek from six to five days had originally been made in 1922.

According to an article published in The New York Times that March, Edsel Ford, Henry’s son and the company’s president, explained that “Every man needs more than one day a week for rest and recreation….The Ford Company always has sought to promote [an] ideal home life for its employees. We believe that in order to live properly every man should have more time to spend with his family.”

Henry Ford said of the decision: “It is high time to rid ourselves of the notion that leisure for workmen is either ‘lost time’ or a class privilege.”

At Ford’s own admission, however, the five-day workweek was also instituted in order to increase productivity: Though workers’ time on the job had decreased, they were expected to expend more effort while they were there.

Manufacturers all over the country, and the world, soon followed Ford’s lead, and the Monday-to-Friday workweek became standard practice.