How desperate are liberals to slander the objects of their prejudice? This desperate.

The day after Christmas, presidential daughter Ivanka Trump posted the following tweet containing a few snapshots of her family’s holiday getaway in Palm Beach, Florida, which included a bit of fishing at one point:

To any kid, this fish is a trophy! ? ? ? pic.twitter.com/wSpMZ0aFkQ

Pretty harmless, right? I haven’t gotten any memos lately about fishing being added to the National Microaggression and Trigger Registry, so what could possibly be controversial here? Well, the Daily Wire and Twitchy note that various liberals have been noticing one particular background detail in one of the images: 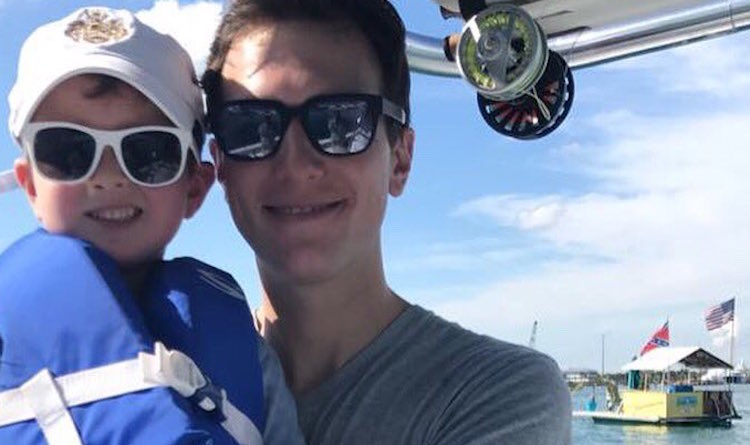 Your eyes do not deceive you: flying above that little dock in the corner is none other than the old Stars and Bars, the Confederate Battle Flag.

Sure enough, frothing leftists took to Twitter and promptly declared that this totally means something. And not all of them were fringe nobodies; the first guy listed below was a former director of the Office of Government Ethics director (no wonder ethics in government didn’t take):

Confederate flag over Jared's shoulder. Couldn't find four photos without one? Or is this a dogwhistle?

Hey @IvankaTrump, what's up with the confederate flag in the background up the upper right picture? https://t.co/0mLjJ04j9i

Are. You. Fucking. Kidding.

There's a Confederate flag in the background of that photo.

Left-wing rags Raw Story and the Daily Dot got in on the action, too. From the Dot’s Andrew Wyrich:

Given the criticism her father has received for his defense of Confederate statues as “beautiful” and for his saying tearing them down would harm American “history and culture,” the Confederate flag flying in the background of a family photo might not be the best optics.

The New York Times wrote the president’s remarks about the Civil War statues echoed the “heritage not hate” phrase used by the Sons of Confederate Veterans, a group that has had racially-tinged controversies in the past, according to the Southern Poverty Law Center.

Not to be outdone, Raw Story’s Noor Al-Sibai quoted part of the above passage, and topped it by claiming President Donald Trump did more than oppose the indiscriminate teardown of historical statues; in doing so Trump had supposedly also mounted a “strange defense of the Confederacy” itself. No, Al-Sibai didn’t bother to produce a single quote of Trump expressing sympathy, support, or rationalization of the rebellion against Abraham Lincoln’s election or that rebellion’s attempts to form a new, explicitly pro-slavery government.

Everything else here is similarly bogus. Trump unequivocally condemned the bigots in Charlottesville from his very first comments on the incident; the mainstream media simply pretended otherwise because he also dared to note that leftist counter-protesters were violent and hateful too, and he made an (ill-considered, but ultimately benign) statement that he believed there were others in attendance purely there to oppose tearing down historical markers, not to make any sort of racial message. That was a foolish qualifier — presumably any decent people who showed up at the “Unite the Right” rally turned around and left as soon as they saw all the swastikas — but the underlying point about the importance of remembering the good and the bad about American history was perfectly correct, as was his warning that leftist mobs wouldn’t stop at Confederate leaders.

But even assuming that Donald Trump was a secret secession sympathizer, what’s the conspiracy theory here — that the family of his more-liberal daughter actively sought out an area with a Confederate flag to go fishing in? That they brought their own flag? That the flag being there was a coincidence, but that once they saw it they consciously made sure to get it into one of the shots? Or that they have some obligation to make sure they’re never even remotely in the vicinity of Confederate imagery? All of this is even dumber than that fringe internet meme about Barack Obama supposedly flashing black/Muslim gang signs (something I don’t recall any real conservative ever pushing, yet we still heard leftists accusing us of it).