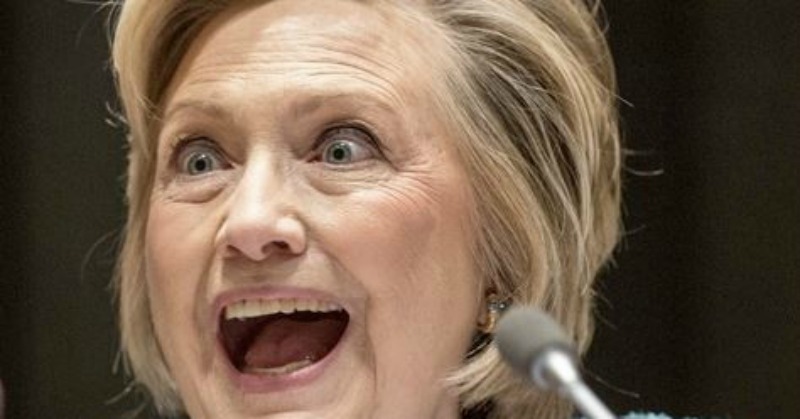 Do you remember when Democrat nominee Hillary Clinton gave a speech where she actually read the word “sigh” from her script instead of, well, actually sighing? Well, Hillarybot also has to be told when to smile, as revealed in an email released by WikiLeaks reportedly from Clinton campaign chairman John Podesta’s account.

During the Democrat primary debates — before Sen. Bernie Sanders had finally been done in by the strong-arm tactics of the Democrat National Committee — Clinton had to be instructed to smile at certain points in her scripted remarks.

“[Smile] My goodness, I was having a lighthearted moment when I said that,” the scripted remarks read. “Look, my dad was a Republican.”

It’s pretty bizarre that Clinton needs to be told how to behave like a human being and how to appropriately interact with others. That said, there are numerous reports of Clinton’s infamous temper and bizarre behavior toward others that make this email leak not particularly surprising, but no less creepy and bizarre.

Take a look at this video where Clinton cackles in response to the crowd reacting far more favorably to Sanders:

Then there’s the creepy way Clinton has responded to GOP nominee Donald Trump during the presidential debates. Clinton has a creepy, maniacal smile when Trump gets a jab in but, as evidenced in the last debate, when Trump hit a little too close to home that smile was wiped straight off of her face.

Clinton tried to smile and laugh throughout the debate but it was clear that Trump backed her into corners that she wasn’t prepared, or able, to get herself out of.

Although I certainly hope that Clinton doesn’t win, it would be an extraordinary loss for her if she doesn’t, and a prime example of how abysmal a candidate she is.

Everything is rigged in her favor. The DNC, the media, the Department of Justice, FBI Director James Comey, etc., etc. Even President Obama is working for her after their bitter 2008 primary battle that very likely resulted in a backroom deal being made that somehow compelled him to do so.

If GOP presidential nominee Donald Trump is able to win he isn’t just beating Clinton, he’s beating the whole rigged system. That would be an incredible win for Trump but an even bigger win for the American people.

No amount of smiling can distract from the fact that Clinton has the blood of four Americans on her hands and has yet to be held accountable for her criminal conduct as Secretary of State.

Hopefully the American people remember that in November.