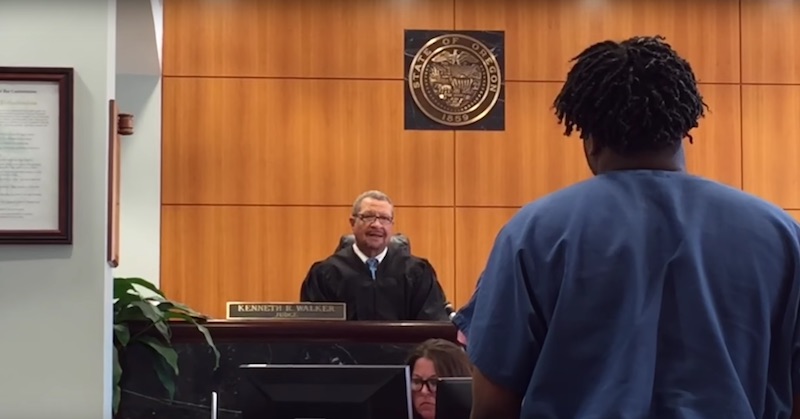 After telling everyone present that all of the guns in America should be “dumped in the ocean;” after saying that we should “eliminate all of them,” Judge Kenneth Walker told the courtroom that owning a gun is a “right of people in this country” and he’s not going to “say anything to affect that right.”

Gee, thanks, your honor. We thought you were going to say something crazy.

While the thug looked on, Walker went on a leftist political rant about the evil of guns – all guns – in America. (Something I’m sure the murderer could not have cared less about.)

“Even as the law allows people to own and use guns,” he said, “if it were left up to me, from what’ I’ve seen in 65 years of living in the communities I have, if I could I would take all the guns in America, put them on big barges and go dump them in the ocean,” the judge told the defendant. “Nobody would have a gun. Not police, not security, not anybody. We should eliminate all of them. We could save 33,000 people a year if we didn’t have guns in this country.”

“Australia after a major shooting rounded up all the guns, and they haven’t had near the death that we do here in this country,” he said.

“I just saw last night a statistic that 11,000 people in America are murdered each year and another 20,000 commit suicide with guns,” Walker said. “They are a scourge of this country and no one should have one as far as I’m concerned. There’s no defense to guns. There’s just absolutely no reason to have them. But it is a right of people in this country to own and possess them, and I will not say anything to affect that right.”

You won’t, Judge Walker? You didn’t just belt out an idiotic, leftist tirade from behind the bench, your honor?

Or are you suggesting that as a two-bit county judge, you have the authority to really affect the Second Amendment? Do you think you can confiscate everyone’s guns with an edict from the bench?