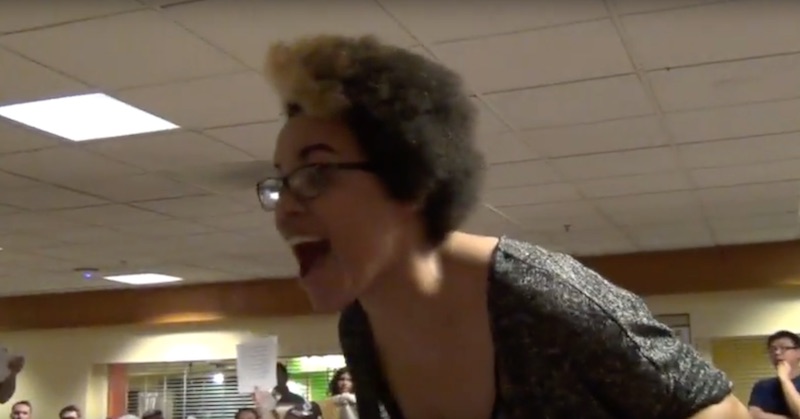 Leftist students stormed a small pro-Donald Trump meeting organized by his supporters at Portland State University, harassing and verbally abusing them until the meeting dissolved.

That’s how the left – especially on college campuses – get their way now: through intimidation and harassment.

The group “Students for Trump” at Portland State University (PSU) announced their meeting on their Facebook page for Thursday at the student union.

But instead of a small, peaceful gathering of Trump supporters, dozens of leftist student protesters stormed the meeting, representing “students of color,” pro-minimum wage groups and pro-gun control groups, the PSU Vanguard is reporting.

The meeting escalated to shouting, threats and name-calling. Most of the threats were from the anti-Trump protester.

“Every single Trump supporter has a full legal name attached to a social security number with a place of residence, [and] an employer…that information is easy to find online,” said one protestor. The same protestor jumped on a table and was in a near-fight with Students for Trump organizer Stephen Johnston after being called an “Anti-faggot.”

Eventually, the small pro-Trump student group moved their meeting to another part of the room, but the protesters followed. The anti-Trump students outnumbered the original pro-Trump group by two-to-one.

During this confrontation, a fight almost breaks out:

The leaders of the anti-Trump PSU group were student activists Olivia Pace and Alyssa Pagan. These two were also organizers of at least three protests at the school’s Board of Trustees meetings. At the trustees meeting last week, PSU’s appointed board left after protesters shut down the meeting and took over the room. The board then voted on tuition increases from an emergency communications room across campus.

Students for Trump organizer Volodymyr Kolychev told the Vanguard that he anticipated the protests. He described the planning meeting as “bait.” Kolychev and the handful of supporters were all wearing Trump’s red “Make America Great Again” hats.

After several hours of protests, Kolychev said the protesters hadn’t swayed him. “Are you asking if I still support Trump? More so,” he told the Vanguard. Here’s a longer video showing how idiotic the anti-Trump students were behaving: