Occasional Washington Post writer and rabid leftist millennial kid Malcolm Harris just tweeted what might be the most vile comment to date about the shooting at the Congressional Baseball practice in Virginia.

He has since deleted the tweet, but the Internet is forever, and we have a screenshot: 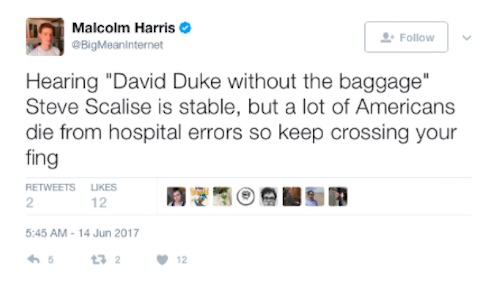 “Hearing ‘David Duke without the baggage’ Steve Scalise is stable, but a lot of Americans die from hospital errors so keep crossing your fing[ers],” he wrote.

That post was deleted, but he has since posted – and kept up – other almost-equally vile tweets.

If the shooter has a serious health condition then is taking potshots at the GOP house leadership considered self defense?

Late last week, the Post featured Harris in their “PostEverything” section. He has also appeared in The New Republic and Salon. He also says he writes for The New Inquiry. 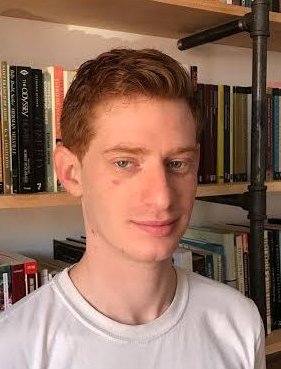 On his Twitter bio, he used to claim he was a full-time staff writer for Vox, but there’s no mention of him anywhere on the site. He has since changed his bio to read “NOT a full-time employee.”

The 20-something pimply writer is the author of a book on his fellow millennials. The book has been out for seven months, has no reviews, and is currently ranked as the 379,445th most popular book.

He must be so proud.