Human Rights Activists are claiming that two transgender people, 35-year-old Amna and 26-year-old Meeno, were “tortured to death” by police in Pakistan.

Reports indicate they were placed in sacks and beaten with sticks after police raided a house, arresting 36 transgender people. 11 were released after paying a fine of over £30,000 each. 22 people still remain in custody.

Human Rights Activists, including feminist and social rights activist Qamar Naseem, are demanding to know what happened to the two people who were killed and the 22 still in jail.

“They are not treated fairly even by criminal law in Saudi Arabia, and it’s not just people from Pakistan, it’s people from different parts of the world. Gender fluid people are treated badly, sometimes flogged, and if someone is arrested on the same law for a second time they can be executed.”

Below is a map showing placed in the world that have criminal punishments for those identifying with the LGBTQIA+. 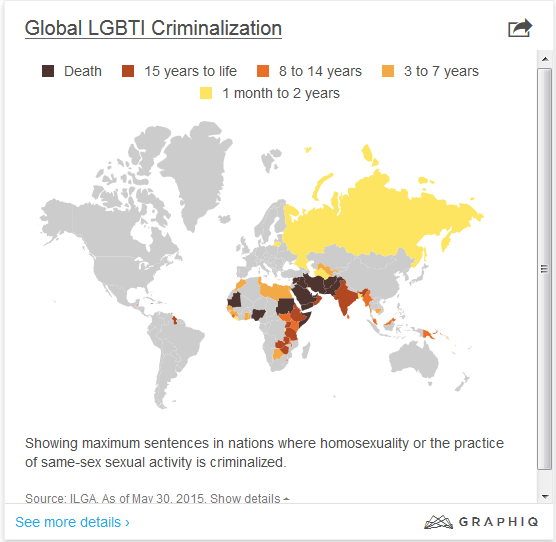 Their crime? They were allegedly “cross-dressing” and engaging in homosexual relationships in the capital city of Riyadh. For those wondering, homosexuality is punishable by death, while any sort of sex change surgery is illegal.

This is not the first anti-LGBT move made by Pakistan recently. Just last year the Travel Agents Association was ordered to refuse visas to any transgender person wishing to participate in the Hajj or Umrah pilgrimage. At the same time, Saudi Arabia requested that the UN keep the LGBT rights agenda out of its “developmental goals.”

Liberals will tell you that the United States has a terrible of history of inequality when it comes to those in the LGBT community, but American activists remain suspiciously silent when it comes to the horrifying and inhumane treatment of homosexuals overseas and specifically among the Islamic community.

We can’t drag these people into the 21st century, but we can warn people of their policies and prevent them from being harmed in these backward countries.