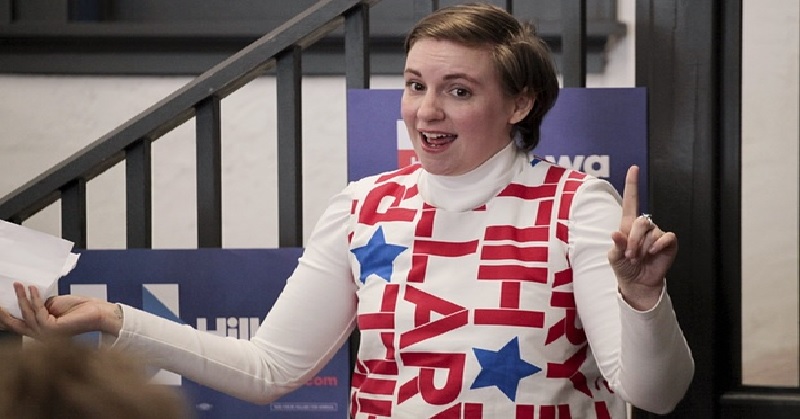 Is there a joke older than claiming you’ll move to Canada if your Presidential candidate doesn’t win?

At least – I’m assuming that it’s being made as a joke, because people seldom follow through with their plan.

With the rise of Donald Trump, there’s been no shortage of Hollywood liberals notifying the rest of us they’ll leave the country if Trump is elected.

So far the list consists of Cher, Jon Stewart, Samuel L. Jackson, Rosie O’Donnell and Miley Cyrus. And today another name was added to that list: Lena Dunham.

Speaking at the luxurious Waldorf Astoria hotel for the 2016 Matrix Awards, announcing emcee Andy Cohen asked Dunham what she would do if she woke up and was a man, according to Bustle.

Dunham, who was at the event receiving an award, responded saying she would kill herself.

Cohen then reportedly asked what she would do if she woke up to find that Trump had been elected president.

The Girls creator and Hillary Clinton supporter then vowed she already had a “great place” in Canada she planned to relocate to.

“I know everyone’s always idly threatening this, but I’d be 100 percent moving to Canada,” Dunham enthusiastically replied, according to Bustle. “I love Canada. I think that it’s a great place, and there’s an area in Vancouver that I find beautiful and appealing, and I can conduct business from there.”

She better stop threatening to leave for Canada – or else she may get Trump elected.

Trump hasn’t said much about Dunham, except that she’s a “B-list actor,” but is ready to capitalize on liberal celebrities threatening to leave the country.

When told about Rosie O’Donnell threatening to leave, he replied “”We’ll get rid of Rosie? Oh, I love it.” After hearing that Whoopi Goldberg and Jon Stewart made similar threats, Trump replied “Now, I have to get elected, because I’ll be doing a great service to our country. I have to.”

As someone who was thoroughly entertained by the Trump/Rosie O’Donnell feud, I can only hope that a full fledged feud between Trump and Dunham emerges. I’ll end with a video of what could be soon to come: