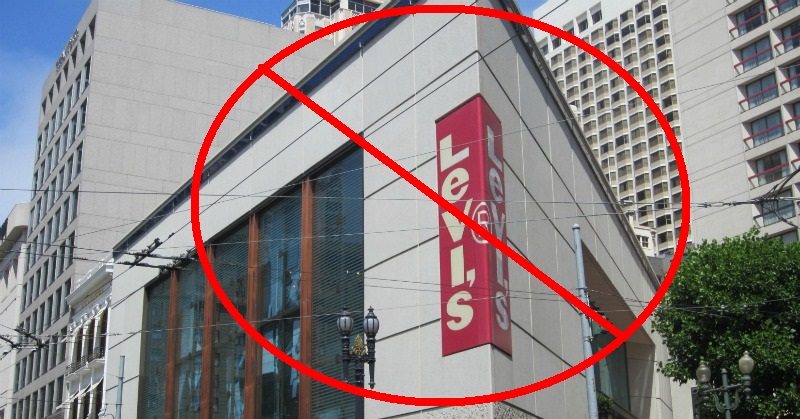 Well, conservatives and anyone else that respects the Constitution have another company to boycott — Levi Strauss & Co. CEO and President Chip Bergh wrote an open letter in which he requested that customers not exercise their right to keep and bear arms in the company’s stores, offices, or facilities.

The CEO of Levi’s is asking customers and employees not to bring guns into its stores, offices or facilities, even in states where it’s legal.

Levi Strauss & Co. President and CEO Chip Bergh wrote Wednesday in an open letter posted on LinkedIn that a customer was injured in a Levi’s store recently after the customer’s own gun inadvertently went off. He said Levi’s isn’t banning guns, just requesting people not bring them into its places of business.

“We know that the presence of firearms in our stores creates an unsettling environment for many of our employees and customers,” said Bergh, noting that he is a former army officer. “We also know that trying to enforce a ban could potentially undermine the purpose of the ban itself: safety.”

He added that consumers shouldn’t have to be concerned about their safety while shopping for clothes, saying that “firearms don’t belong” in stores.

People hit back on social media to explain to the clueless CEO how ridiculous his “request” was. One individual wrote on LinkedIn, according to CBS News: “You have, though, made it a lot easier for terrorists to recognize Levi stores as a soft target. Nice going.”

Another individual wrote, “My safety depends on my lawful carry of a firearm.”

Yes it does, and potentially may save the lives of many others as well. It’s also incredibly dangerous to make your stores sitting ducks. If someone knows that a store, or any other place, isn’t armed, they become targets. That’s just common sense, as the individual on LinkedIn pointed out.

It’s unclear whether or not these stores/offices/facilities will employ security or not in lieu of their customers being able to protect themselves.

Bergh’s “request” for people to leave their guns at home when they enter Levi’s stores may well result in many people taking their wallets elsewhere to businesses that respect the Second Amendment.

While there may be some that are “uncomfortable” with someone exercising their right to keep and bear arms, I am far more uncomfortable with the disrespect of the Second Amendment and the idea that people may not be able to protect themselves from criminals/terrorists that aren’t known to heed such “requests.”