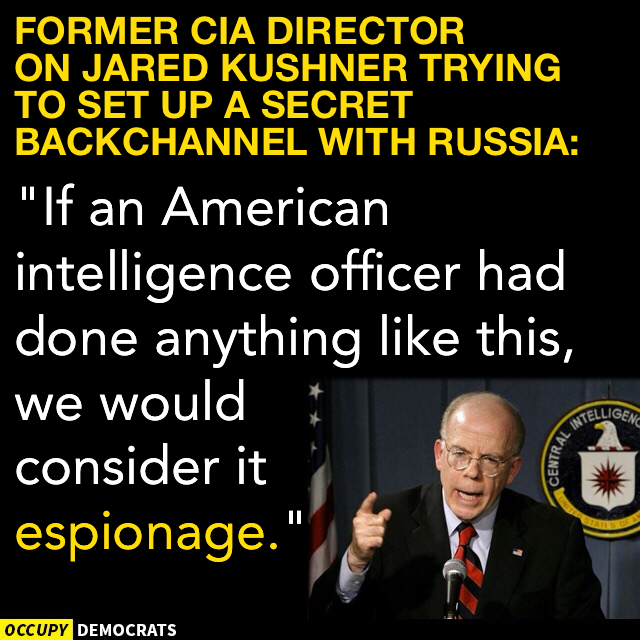 Occupy Democrats are still at it. This time their lie of choice is regarding the supposed “secret back channel” to Russia that Jared Kushner may or may not have set up.

Mind you, even the left-wing media has already stated this is completely normal. According to Zero Hedge:

So, to summarize – after Trump won the election (thus not before the election and not showing any election-tampering collusion), Kushner began discussions with the US representative of another world super-power to set up the back-channel-communications that are standard when any new president is elected.

If that’s the best the media has for a long weekend, then perhaps, just perhaps, we have jumped the shark in terms of ‘damning’ leaked intercepts? Or perhaps the assumption is that the average WaPo reader will not reach the 16th paragraph, merely content with the headline confirmation of their own bias?

What’s even more amusing is that these people seem to forget the Obama Administration’s dealings with Russia. From Bloomberg:

“I don’t think that anybody at this point is under the impression that a wholesale reset of our relationship is possible at this time, but we might as well test out what they are actually willing to do,” a senior administration official told me. “Our theory of this all along has been, let’s see what’s there. Regardless of the likelihood of success.”

Leading the charge has been Secretary of State John Kerry. This fall, Kerry even proposed going to Moscow and meeting with Putin directly. The negotiations over Kerry’s trip got to the point of scheduling, but ultimately were scuttled because there was little prospect of demonstrable progress.

In a separate attempt at outreach, the White House turned to an old friend of Putin’s for help. The White House called on former Secretary of State Henry Kissinger to discuss having him call Putin directly, according to two officials. It’s unclear whether Kissinger actually made the call. The White House and Kissinger both refused to comment for this column.

Kerry has been the point man on dealing with Russia because his close relationship with Russian Foreign Minister Sergei Lavrov represents the last remaining functional diplomatic channel between Washington and Moscow. They meet often, often without any staff members present, and talk on the phone regularly. Obama and Putin, on the other hand, are known to have an intense dislike for each other and very rarely speak.

There seemed to have been all kinds of secret dealings with Russia during the Obama Administration, but of course that will be ignored. It’s unfortunate the left refuses to tell the truth about what Trump’s Administration is actually doing. It shows they care nothing for the truth and everything about continually dividing the country.