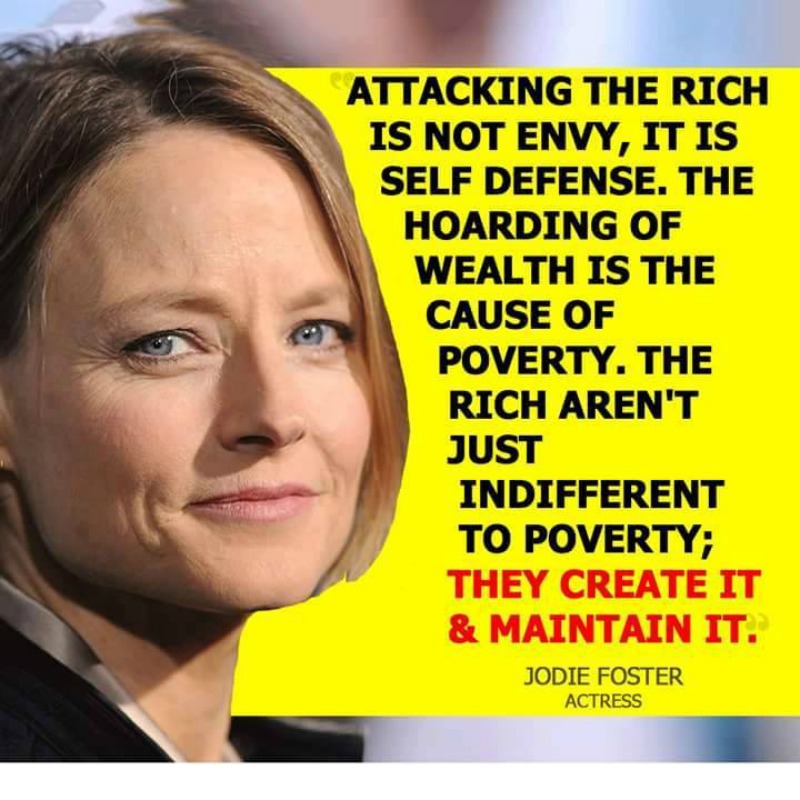 It’s also a bit amusing that another Hollyweirdo beats on the rich when she herself is worth around $100 million or something. Maybe that’s just chump change to her.

No one is hoarding wealth. Wealth isn’t a pie that some people get bigger pieces of. It’s something that is EARNED.

Understand, Jodie? Just like you EARNED your millions by making movies. Are you hoarding your wealth?

When LBJ put his ‘War On Poverty’ programs into place 50 years ago, people were advancing out of it. Now poverty is at a 50 year high. What’s the difference between now and then? Massive government programs that keep poor people poor.

Massive government regulations that kill jobs and hurt the economy and hurt the poor all while creating more poverty.

Fifty years ago, President Lyndon Johnson declared “War on Poverty.” It sounded great to me. I was taught at Princeton, “We’re a rich country. All we have to do is tax the rich, and then use that money to create programs that will lift the poor out of poverty.” Government created job-training programs for the strong and expanded social security for the weak.

Johnson’s War brought further progress, but progress then stopped. It stopped because government is not good at making a distinction between needy and lazy. It taught moms not to marry the father of their kids because that would reduce their welfare benefits. Welfare invited people to be dependent. Some people started to say, “Entry-level jobs are for suckers.” Many could live almost as well without the hassle of work.

So, Jodie, take an economics and a history class and then talk about who creates poverty and why it even exists. Otherwise, just stick to Hollywood and earning millions of dollars to act in a movie. Maybe you can start redistributing more of your wealth to the poor to make yourself ‘feel good.’