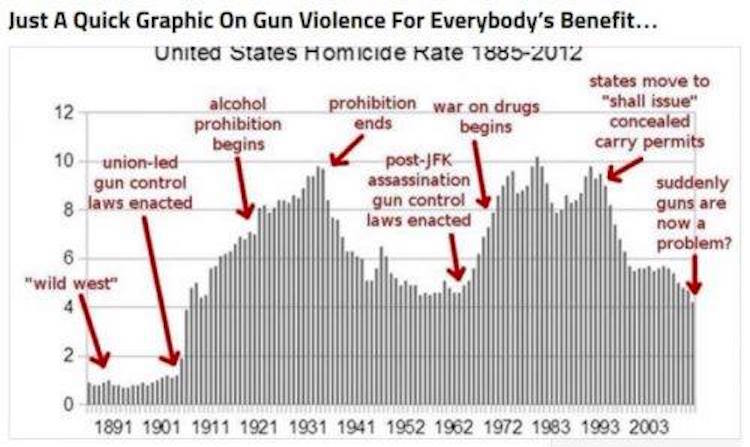 Seth Connell writes that those of us who are read up on the importance of our right to bear arms know that banning guns does NOT reduce crime. It may stop a couple of gun crimes, but the overall crime rate often goes up in places where citizens cannot own firearms for self-defense (such as the UK).

However, over six years ago, there was another organization that published a powerful story warning about the dangers of banning guns, especially at the local level. During 2010, the Second Amendment was applied to the states in the case of McDonald vs Chicago. That same year, the Chicago Tribune warned about the dangerous policies enacted by the city.

On March 04, 2010, the Chicago Tribune reported that the hallmark of municipal gun bans was a sharp increase in death rates, and it suggested the reason for the rise in fatalities was because bans affect law-abiding citizens rather than criminals.

The Tribune admitted the failure of gun bans nearly two years after the Supreme Court of the United States overturned Washington DC’s ban in District of Columbia v Heller (2008) and roughly three months before SCOTUS would overturn Chicago’s ban in McDonald v Chicago (2010).

According to the Tribune, municipal gun bans are flawed in concept. Therefore, rather than a decline in homicides, the years following the implementation of DC’s gun ban saw “the number of killings [rise] by 156 percent.” And the surge in killings came “at a time when murders nationally increased by just 32 percent.” The death rate grew so high that DC “vied regularly for the title of murder capital of America” after the ban was implemented.

The article titled “Chicago’s pointless handgun ban: City gun ordinances proved to be a failure,” author Steve Chapman slammed the City of Chicago for laws that made the Windy City one of the most dangerous in the United States.

The Second Amendment may kill such restrictions [as Chicago enacted], but in most places, it wasn’t needed to keep them from hatching in the first place.

Maybe that’s because there were so many flaws in the basic idea. Or maybe it was because strict gun control makes even less sense at the municipal level than it does on a broader scale. At any rate, the policy turned out to be a comprehensive dud.

In the years following its ban, Washington did not generate a decline in gun murders. In fact, the number of killings rose by 156 percent — at a time when murders nationally increased by just 32 percent. For a while, the city vied regularly for the title of murder capital of America.

As Chapman noted, on a municipal level, gun bans make even less sense than they do on a broader scale. Whereas the broader areas have access to firearms, for both citizens (as they should) and criminals (as they should not, but still do on the black market). In areas where municipal bans do not act on citizens, crimes rates did not increase as quickly as they did where guns were banned.

The ban on handguns in the City of Chicago only affected the residents who had not, nor were ever inclined to commit crimes. Clearly the ban on handguns did not cause any reduction in crime; and arguably, it only empowered criminals and left all other residents at the mercy of gangs and thugs on the streets.

Now, of course, the Left will use this example as justification to bans guns nationally (in spite of the clear language of the Second Amendment, but let not the Supreme Law of the Land thwart population control schemes). Hillary Clinton has stated multiple times that she favors Australian style gun confiscations and bans. And don’t underestimate her resolve to do that with or without Congress.

It makes no sense to ban guns in a municipality or a nation as a whole. Why jeopardize your population’s safety? Why violate the natural right of self-defense?

Well, once you realize that it’s not about our safety, it all makes sense…