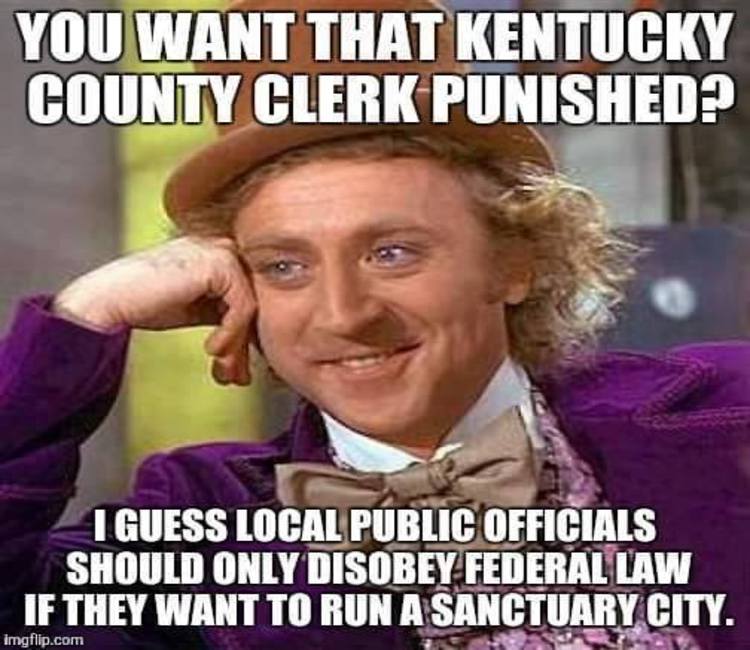 The Federalist Papers reports on the freedom of religion double-standard going on here in America:

Kim Davis, Kentucky country clerk, was recently arrested after she was found in contempt of court for not issuing marriage licenses to same-sex couples. She says that the action would violate her religious beliefs as a Christian.

U.S. District Court Judge David Bunning placed Davis in the custody of U.S. marshals until she complies with their order. He said fines were not enough to force her to issue the licenses, and allowing her to defy the order would “create a ripple effect.”

“Her good-faith belief is simply not a viable defense,” said Bunning, who also said he has deeply held religious beliefs. “Oaths mean things.”

But critics are not happy about her arrest, saying it is an attack on religious freedom in the United States. They also claim that the law is not being enforced equally, and cite the case of Charee Stanley as evidence.

Ms. Stanley is a Muslim woman who, with the help of CAIR (Council on American-Islamic Relations,) has filed a complaint against her former employer, ExpressJet for not accommodating her religious values. She says the airline did not work to reasonably work out an arrangement that would prevent her from being forced to serve alcohol, which violates her religious beliefs. The Political Insider published this quote:

A Muslim-American group plans Tuesday to file a discrimination complaint with the Equal Employment Opportunity Commission against ExpressJet Airlines for allegedly failing to accommodate a Metro Detroit-area Muslim flight attendant who objects to serving alcohol based on her religious beliefs.

The Michigan chapter of the Council on American-Islamic Relations said the airline had directed employee Charee Stanley , to work out arrangements with the other flight attendant on duty to accommodate passengers’ requests for alcohol. The setup, it said, had worked without incident until Aug. 25, when ExpressJet placed Stanley on administrative leave for 12 months, after which her position may be terminated, according to CAIR.

“We have informed ExpressJet of its obligation under the law to reasonably accommodate Ms. Stanley’s religious accommodation request regarding service of alcohol,” Lena Masri, staff attorney for CAIR-Michigan said in a statement.

While it can be said that the cases are very different, as Davis was elected to do her job, consider the following:

In closing, I’d like to note that the White House coming out and saying that Davis had to be arrested because “nobody is above the law” is hypocrisy at its finest.